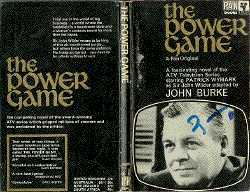 After the plane factory closes, John Wilder (Patrick Wymark)continues to enjoy the thrill of big business. Having collected a knighthood, and bored of being a gentleman of leisure, Wilder uses his influence with a merchant bank to become joint managing director of an established building firm, Bligh Construction. The first two series of The Power Game in 1965-6 chronicled his attempts to keep control in the face of opposition from the company's elderly founder Caswell Bligh (Clifford Evans), a stern, old-school patriarch who resents what he sees as Wilder's imposition on a family firm, and Bligh's ambitious but inexperienced son Kenneth (Peter Barkworth), who would prefer to be sole managing director, and free of his father's influence. Both Henderson and Miss Lingard were back in harness.

Wilder's private life came more to the fore in The Power Game, he has a long-running affair with a civil servant, Susan Weldon (Rosemary Leach), but is aghast when his wife Pamela also plays the field, with engineering expert Frank Hagadan (George Sewell).

The third and final series in 1969 saw Wilder free from Bligh's - but not from Bligh himself - and working for the British government as a 'roving' Foreign Office Ambassador for Trade.