David Main is an ambitious, dynamic and highly capable young solicitor who, having gained valuable experience in London, returns to his native Leeds to establish a new practice. He's in law because it's the main chance-the main chance to make big money & the main chance to help his clients beat the system. Driven by a thirst for success, Main seeks out the most lucrative cases, but is also a man with a conscience who often acts for the most vulnerable and under privileged. While his occasionally impetuous approach can take him into difficult legal waters - to the distaste of his more reserved and cautious Leeds partner Henry Castleton - Main's acumen and resourcefulness rarely fail him. 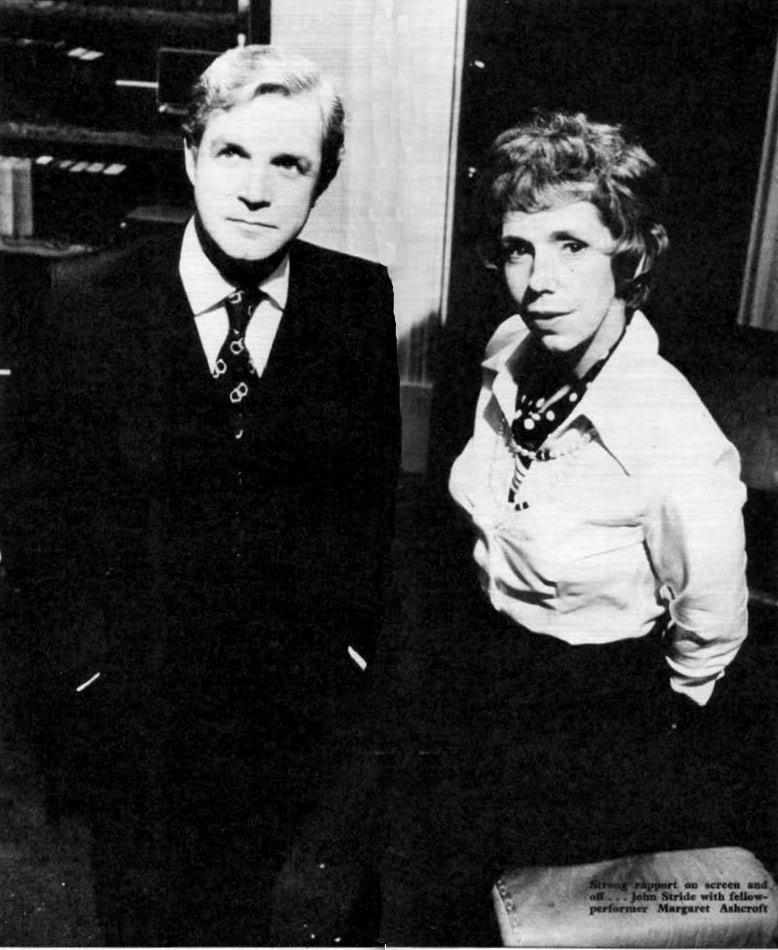 John Stride (The Wilde Alliance) stars as David Main, alongside Kate O'Mara (The Brothers) as his wife Julia, with whom he has a turbulent relationship, and Anna Palk as his efficient and attractive secretary, Sarah, in this immensely popular drama from Yorkshire Television created by John Malcolm and Edmund Ward.

The Main Chance ran for four series between 1969 and 1975. In its first year it was Yorkshire's most successful drama series until then, and while it probably was also the company's most expensive, its success in the ratings and wide critical approval had made it seem a sure candidate early renewal. It seems however lead actor John Stride was wary of becoming type case, so it was 18 months before they started work on season two.

Edmund Ward contributed five of the scripts for the second series and was quoted as saying A series can never stand still, things have changed. Even the law itself, we make sure we keep up with that. The new divorce laws, for instance, are now making their impact in the courts. David Main himself has changed too. He has a deep respect for the law, he's hard, an individual, but he's able to relax more now. He's matured. The senior partner, Castleton, who represents the old guard of the profession, is just beginning to appreciate Main's talents, and with the highly efficient Margaret, they form a formidable partnership - TV Times (27th May 1972).

The show won a Hollywood International Festival of Drama prize 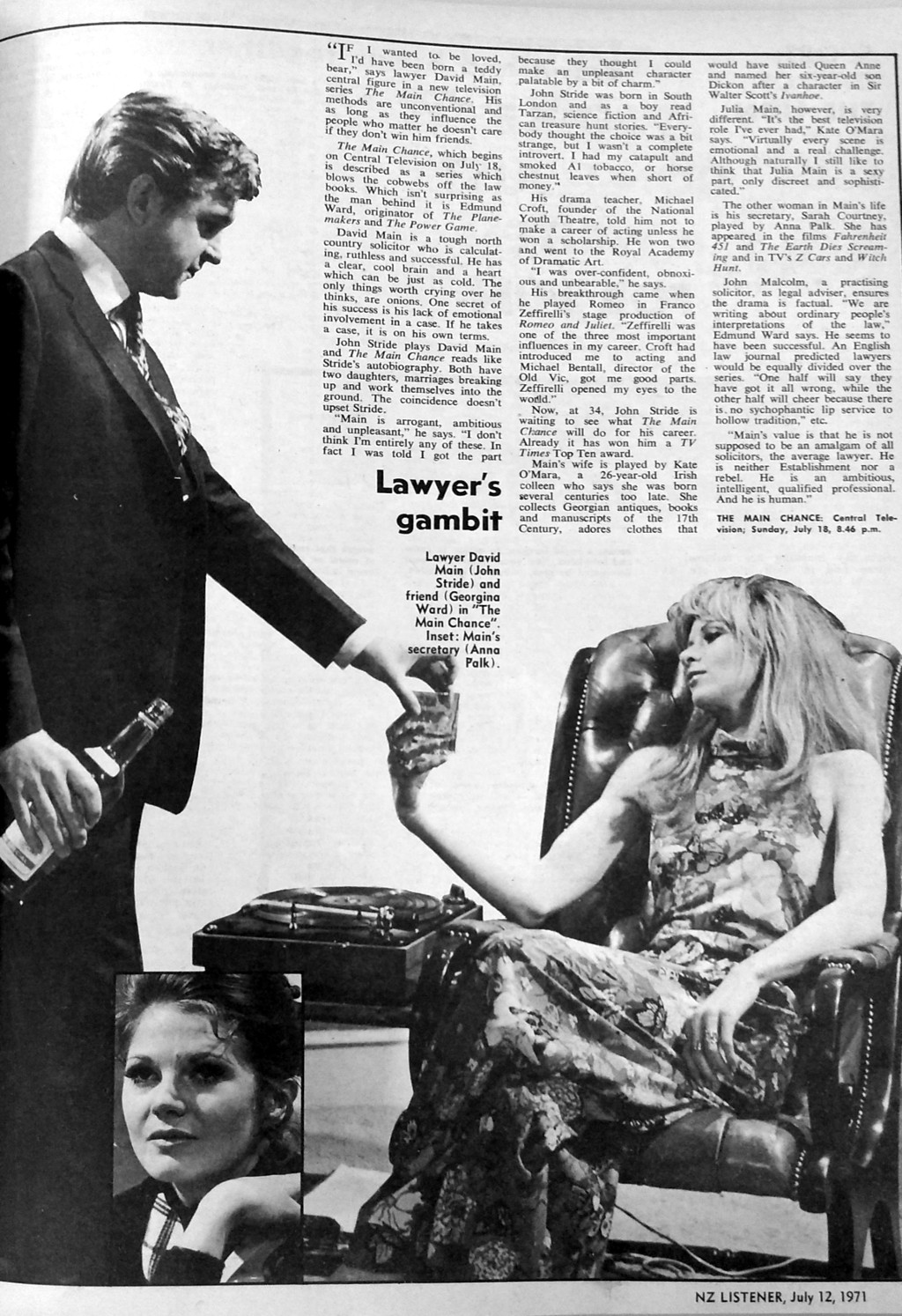 If I wanted to be loved, I'd have been born a teedy bear. says lawyer David Main, central figure in a new television series The Main Chance . His methods are unconventional and as long as they influence the people who matter he doesn't care if they don't win him friends.

The Main Chance , which begins on Central Television on July 18, is describe a a series which boots the cobwebs off the law books. Which isn't surprising as the man behind it is Edmund Ward originator of The Planemakers and The Power Game .

David Main is a tough north country solicitor who is calculating, ruthless and successful. He has a clear, cool brain and a heart which can be just as cold. The only things worth crying over he thinks, are onions. One secret of his success is his lack of emotional involvement in a case. If he takes a case, it is on his own terms.

John Stride Plays David Main and The Main Chance reads like Stride's autobiography. Both have two daughters, Marriages breaking up and work themselves into the ground. The coincidence doesn't upset Stride.

Main is arrogant, ambitious and unpleasant, he says. I don't think I'm entirely any of these. In fact I was told I got the part because they thought I could make an unpleasant character Palatable by a bit of charm.

John Stride was born in South London and as a boy read Tarzan, science fiction and African treasure hunt steries. Everybody thought the choice was a bit strange, but I wasn't a complete introvert. I had my catapult and smoked A1 tobacco, or horse chestnut leaves when short of money.

His drama teacher, Michael Croft, founder of the National Youth Theatre, told him not to make a career of acting unless he won a scholarship. He won two and went to the Royal Academy of Dramatic Art.

I was over-confident, obnoxious and unbearable. he says.

His breakthrough came when he played Romeo in Franco Zeffirelli's stage production of Romeo and Juliet . Zeffirelli was one of the three most important influences in my career. Croft had introduced me to acting and Michael Bentall, director of the Old Vic, got me good parts. Zeffirelli opened my eyes to the world.

Now, at 34, John Stride is waiting to see what The Main Chance will do for his career. Already it has won him a TV Times Top Ten award.

Main's wife is played by Kate O'Mara, a 26-year-old Irish colleen who says she was born several centuries too late. She collects Georgian antiques, books and manuscripts of the 17th Century, adores clothes that would have suited Queen Anne and named her six-year-old son Dickon after a character in Sir Walter Scott's Ivanhoe .

Julia Main, however, is very different It's the best television role I've ever had. Kate O'Mara says. Virtually every scene is emotional and a real challenge. Although naturally I still like to think that Julia Main is a sexy part, only discreet and sophisticated.

The other woman in Main's life is his secretary, Sarah Courtney. played by Anna Palk. She has appeared in the films Fahrenheit 451 and The Earth Dies Screaming and in TV's Z Cars and Witch Hunt.

John Malcolm. a practising solicitor, as legal adviser, ensures the drama is factual. We are wniting about ordimary people's interpretations of the law, Edmund Ward says. He seems to have been successful. An English law journal predicted lawyers would be equally divided over the series. One half will say they have got it all wrong, while the other half will cheer because there is. no sychophantic lip service to hollow tradition, etc.

Main's value is that he is not supposed to be an amalgam of all solicitors, the average lawyer. He is neither Establishment nor a rebel. He is an ambitious, intelligent, qualified professional. And he is human.

This series finds Main re-evaluating both life and career as a face from the past brings formidable repercussions, a forceful newcomer joins the practice, and the conflict between Main's private life and his passion for work reaches a crisis.

This begins with Main at the top of his professional world. A successful future - despite hard economic times - seems assured. Somewhere, however, there is a lorry driver drinking just one pint too many... and in one terrible instant, David Main's life is changed forever, his entire future put at stake.

Three things surround us all our lives - air, build, and the law. But buildings are torn down or replaced, the air grows fresher or fouler. And the law changes in the same way.

This is why The Main Chance on Friday, is a new series. A lot of the rules have changed and David Main is adapting them, using them, sometimes skirting round them to solve the problems his customers push across the expensive desk. They could be your problems.

Since 1972, when Main was last seen using wits, energy and dedication on them, the solutions have changed - with more trouble for solicitors to face. Drive a car? Like a drink? There have been some very neat points of law on breathalysers lately.

Live in a furnished room? Or have one to let? There's now Usually security of tenure for furnished rooms. Problems both ways if you either want to move yourself or shift a tenant.

Find your corner grocer a bit edgy? It's because he spends his evenings filling in V.A.T. Forms and is likely to snarl at you: "We used to be a nation of shopkeepers. Now we're a nation of tax collectors."

If all of this sounds a bit political, it is. Parliament - your elected representatives-makes the law. And even parliament - like you - is surrounded by the law. The British government recently suffered its first defeat at the Court of Human rights in Strasbourg. Because a prison inmate who wanted to sue a prison officer for damages was denied access to a lawyer. This is everybody's changing background. This is the new background of the Main Chance.

in The Main Chance, Stride is surrounded by a cast which shares his views-without pomposity and with a lot of private humour. Stride shouting at John Wentworth, gowned a Recorder for his Henry Castleton part: "Tell the Judge to get his frock on straight or I'll get Danny La Rue to give him lessons."

Margaret Ashcroft, playing Henry's daughter, and bringing to the part her own deeply-felt social convictions, telling Stride and Wentworth in a coffee-break ad-lib: "I may be only a junior partner in this practice, gentlemen, but you still owe me 60p for sandwiches."

Glynn Edwards playing Walter Glegg, the ex-policeman turned solicitor's Legman, stands next to John Wentworth. Wentworth, dapper, white-haired, patrician, a Roman pro-consul, pillar of the law. Glynn-boat enthusiast-in his barnacle scrapping gear. Wentworth: "If you appeared before me in court in that nautical dustman's outfit, Glynn, I'd have no hesitation in giving you six months ." Edwards: "Wish you would, I'd get David Main to appeal, sue you for false arrest, make a packet." They go on to talk about pub music halls, another of Glynn's passions-his wife is a star performer in one.

John Batt looms in in-legal consultant to the series, co-creator, writer of four of the episodes. "Didn't have time to read Ray's script again on the plane back from Amsterdam but I'll brig the point up with learned counsel this afternoon." He means it and the counsel will be a QC

Batt solves problems for each script which would cost hundreds of guineas for a customer in real life. I told him this once. He said: "I don't see the difference. A character in a script is a customer in real life. He or she must be treated as such. There is no such thing as fictional legal advice, Either get it right, leave it alone or obtain and authoritative second opinion."

There is a meeting with Ray Jenkins-who wrote three episodes-out of breath from a meeting of the Executive Council of the Writers Guild. Sensitive writer, adept at peeling the thin onion skins of ordinary emotion and feeling and the sort of scrum-half who would break both your shin-bones in the first tackle. "Don't see it John," he says. "The law's wrong." John Batt thinks, quotes David Main. "It often is." 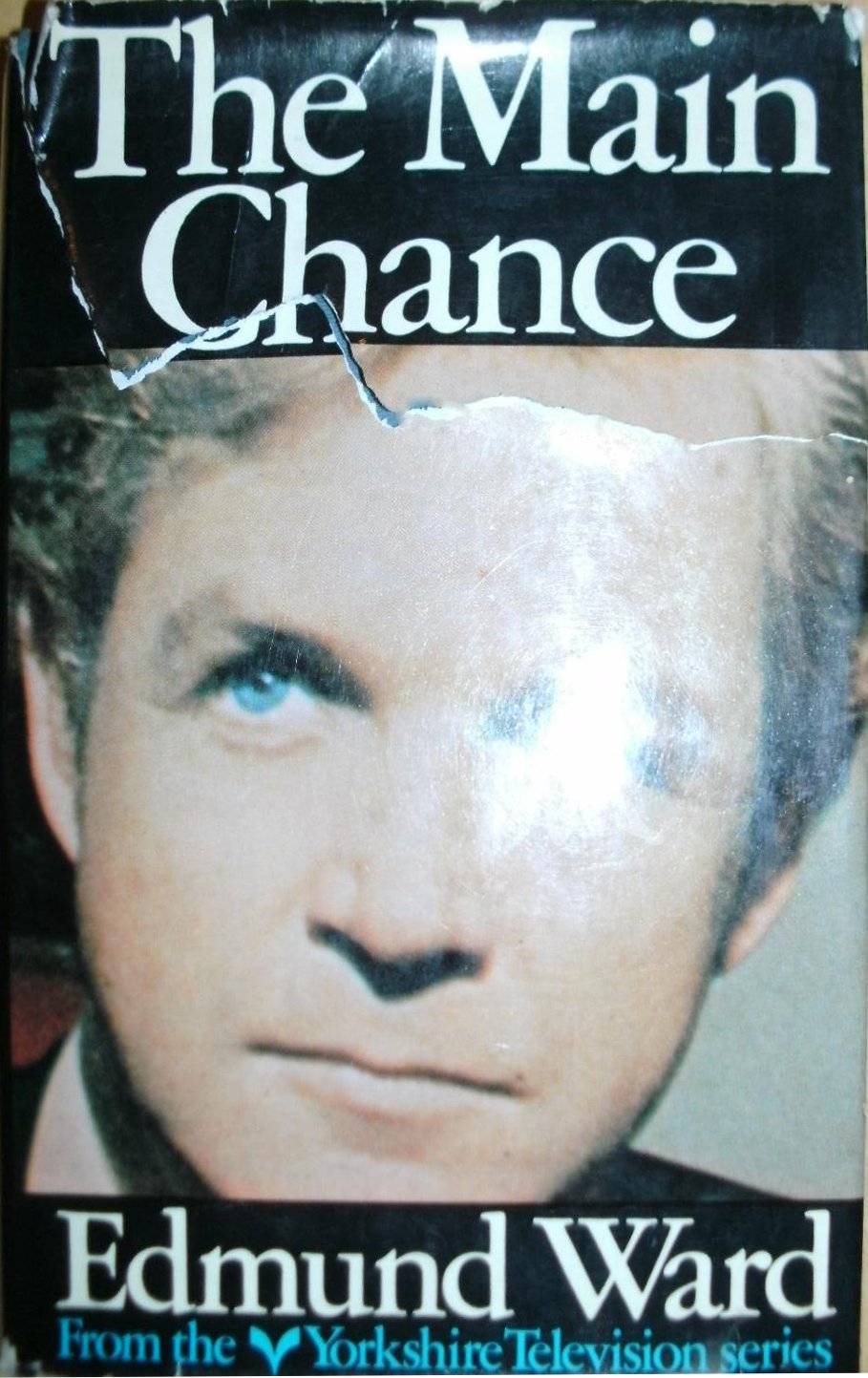 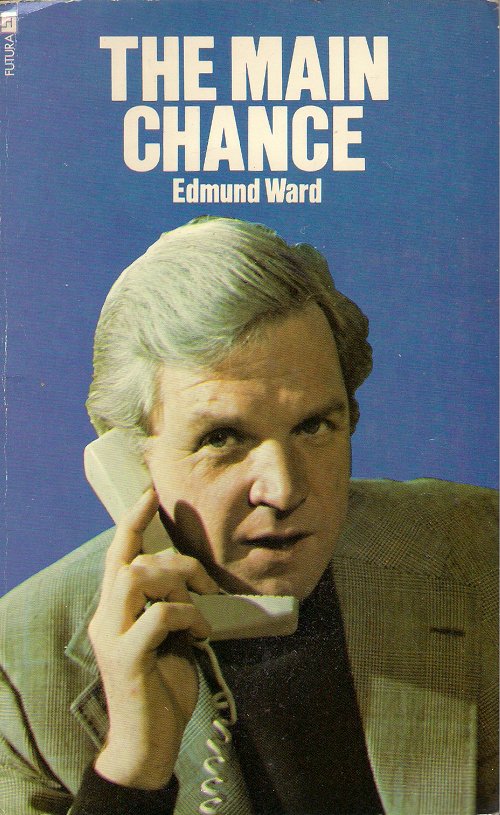 David Main is a solicitor, one of the new breed who uses the law as a tool, ruthless enough to cut through the dusty traditions of profession, avaricious enough to turn bounty-hunter for the fat prizes at issue, fast and ambitious enough for his methods to bring him into abrasive conflict with both opponents and colleagues.

Some of his cases-and clients-leave scars on him, some of the decisions mean private agony. David Main is always running, always hating to lose, knowing all the risks, aware of the scars-and the consequences to his personal life-as he puts other people's problems before his own.

Based on the highly successful Yorkshire Television Series, written by Edmund Ward