From his base near Westminster Abbey, a meek and unassuming Mr. Palfrey, aided by his associate Blair (wonderfully played by Clive Wood), uncovers those who trade in treason. Less a spy series, more a gentler drama, this program is illuminated by colourful characters and the many quirks of human behavior. The series didn't last long but it is interesting, especially as one of the writers was George Markstein.

Mr. Palfrey is a meek, mild, and unassuming civil servant. He's also a spycatcher. His world embraces the shadowy halls of government, the offices and establishments in which enemies of the state and unprincipled practitioners of internal politics lurk. Mr. Palfrey watches and waits, evading bluff, counter bluff, double bluff.

When the weight of evidence confirms his instinct, he moves with the stealth and speed of a stiletto blade. Some of Mr. Palfrey's cases include the senior NATO official whose love for a young East European girl almost resulted in a major security leak, the Russian novelist so zealous about his desire to defect that Palfrey was convinced that he was lying, and the former Foreign Office minister whose erratic behaviour was due to a deadly form of surreptitious hypnotism.

MR. PALFREY OF WESTMINSTER brings a new style of investigation to the screen. Understatement, a hint of ruthlessness, and a sharp vein of humour add an extra dimension to what is already gripping drama.

Great news, the fine folk at NetworkDVD plan to release the series on DVD!! 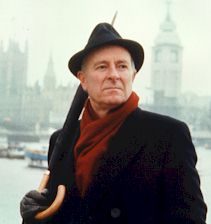 Mr Palfrey is a mild, unassuming middle-aged man - the quintessential middle-rank British civil servant, who enjoys a spot of fishing in his spare time.

Mr Palfrey is also a spook...

As a senior investigator for the Special Intelligence Service, Palfrey's office is based close to the Houses of Parliament. His work is assigned by his female boss, known only as . 'the Co-ordinator., and assisting him is Blair, a younger man adept at dealing with the nastier aspects of counter-intelligence.

This first-time release on DVD comprises both series, originally screened in 1984 and 1985, the Storyboard pilot of 1983, and the .postscript. play transmitted in 1989 and featuring Clive Wood as Blair. 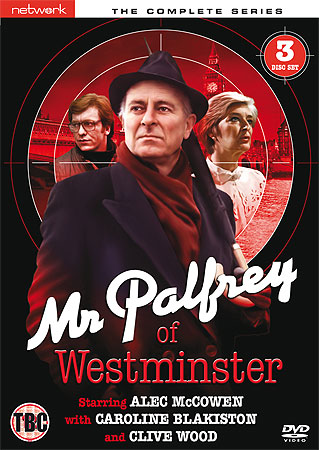