Childhood memories are often the strongest. One of mine is the opening of this TV show. I recall a quaintly drawn seaside town, and then the interior of a shop.It's full of all manner of things. Each week Sam would look at an object in his Aunty Mill's shop. His imagination would be stirred and the magic ball that he always carried would whisk him off on an adventure.

The animation was basic but very effective. I was always amused by the way the baddies would get angry and jump up and down waving their arms... Well, it was funny at the time.

I've looked around on the web and found a few bits of information:

Brian Cosgrove and Mark Hall go back a long way - all the way to Manchester's Regional College Of Art in the late 1950s. Mark graduated in 1957 and Brian 12 months later.

In the 1960s they worked as graphic designers for Granada TV. In 1971 Mark left to form Stop Frame Animations, and Brian joined him a year later. Their first production, Sam and The Magic Ball was an award-winning series said to have been filmed in Brian's garden shed. www.toonhound.com 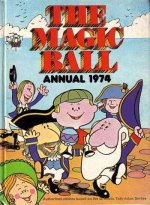 The ever-useful Tv Cream comments Often more wilfully psychedelic in the execution...with extended pans across acid-infused landscapes to abstract electronic burblings aplenty. All but lost now, but well worth a book...

John Archbold has supplied us with an episode guide: 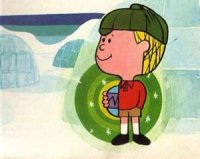 The show was reported to have been repeated on Little Gems mentioned on his message board that a visitor suggested that the show had been repeated with a comedy show shown by the BBC on a Sunday lunch time in 2002. Searches on the net suggest that the show in question was PyjamaParty (UK series).

In July 2005 clips from the show appeared in Those Were The Days, a series that looked back through the Granada Archives.

Thanks to the lovely people at TVARK we can view the opening and closing credits for the show. They list the following crew:

In July 1983 six episodes were released on

I was amused to find that the show gave Badly Drawn Boy the idea for his stage name: According to Damon, This guy was dead pissed off because, not only was he a drawing, but he was a shit drawing too. He wasn't even a good one. And I like That, the underdog thing, that idea of achieving something from nothing.

I don't think Sam ever looked pissed off. He always seemed to stay very charm and level headed whatever the situations. Kind of like James Bond in shorts and a school cap.

For lots of great images, sound files and information regarding the show check out Little Gems: Magic Ball page. 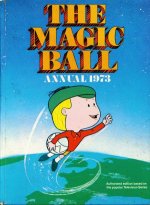