Girl in a Black Bikini

Wellingon viewers are the first in New Zealand to begin following a six-part TV thriller with a provocotive title (Girl in a Black Bikini), and which has been devised by an author whose works are known to everyone in this country who ever watched the small screen

He is John Roddick and, although this is his script for the BBC, his Writings for ATV productions like Danger Man, Sir Francis Drake The Saint, and No Hiding Place have been widely acclaimed. Indeed, he wrote the original nine episodes of Danger Man, Which featured Patrick McGoohan in the lead role as John Drake.

Roddick's story for Girl in a Black Bikini, tells of the finding of a dress belonging to Liza Martin a year after her death, in the exact spot where her body was recovered from the Thames. This find and the subsequent murder of a young man set up a chain of strange events. The whole thing is like a pebble tossed into a pool, with the ripples alfecting everyone, Roddick explains.

The play marks the return to New Zealand screens-in the role of Detective-sergeant Napier-of Glyn Houston, who was seen in Deadline Midnight, a popular series on newspaper life, screened in the earlier days of TV in this country. 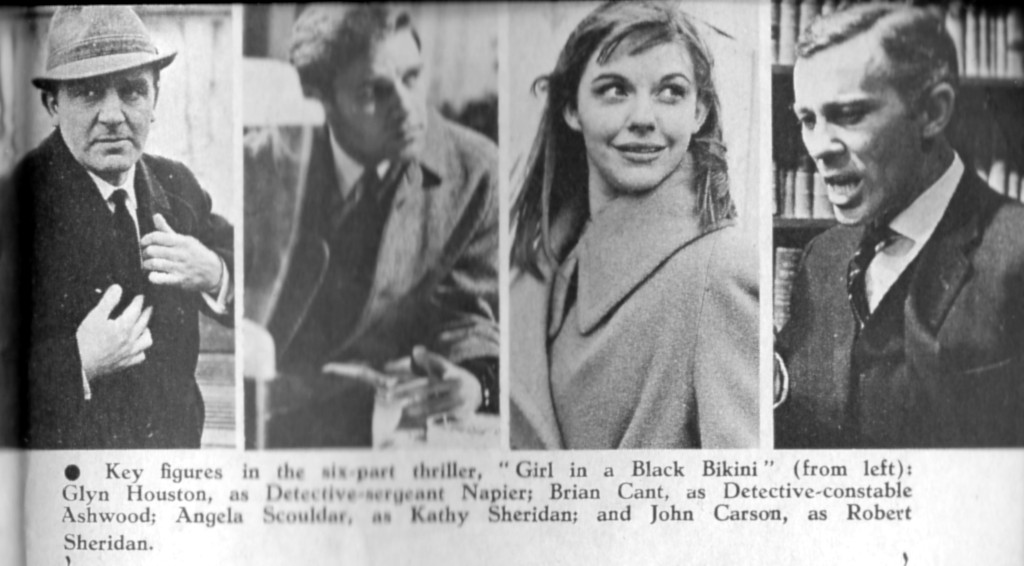 The cast itself is headed by John Carson, who plays a barrister named Robert Sheridan. His daughter, Kathy, played by Angela Scoular, is closely caught up in the death of Liza. Detective-constable Ashwood, played by Brian Cant. Other parts are taken by Jean Harvey, Judy Parfitt, and Brian Wilde.

Episode 1: Lisa Martin was bound to be killed. She was complex and captivating - part devil, part angel. The men who competed for her were more victims than lovers; she played with them as a child plays with dolls. When, on the anniversary of her death, a dress is found at the exact spot where her body was dragged from the river, the quiet Thames-side town of West Ansford learns that 'for someone' the dream world in which Lisa lived has survived her death, twisting through jealousy to vengeance.

Episode 2: Kathy Sheridan, a barrister's daughter, is implicated in a drugs scandal by her boy friend Peter Jarrett, who later keeps a fatal rendezvous at a boat shed.

Episode 3: As evidence mounts that Peter Jarrett's murder is linked to the mysterious death of fashion model Lisa Martin, Kathy Sheridan is terrified by an unexpected caller.

Episode 4: The mystery surrounding Lisa Martin's death is heightened when Kathy Sheridan finds that all records and photographs of Lisa are missing from the office of the local paper.

Episode 5: When Sergeant Napier at last gets hold of the complete bikini snapshot he is shocked to recognise the face of the girl.

Episode 6: Sheridan finds that someone has broken into Ramsey's houseboat. Inside he finds the reason.