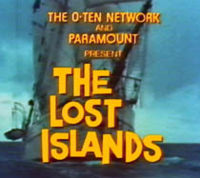 Once upon a time in the 1970s, some enterprising Australians decided to make a really, really rubbish children's television programme. They called it The Lost Islands. If it was so bad why have we devoted a page to it? Maybe because it's so bad it's gone past bad and come back to good. See for yourself. Here are the opening credits:

And if you enjoyed them, here are the closing credits.