When a detective is found with severe head injuries near a cafe in Zeebrugger, mavrick Belgian police Inspector Pretorius is assigned the case. His enquiries lead him to suspect that the injured policeman was involved in a cocaine ring - not as an investigator, but as a participant.

This two hour Telemovie/play was broadcast in the UK on the 1st of September 1987, and screened in New Zealand on the 26th of August, 1989. 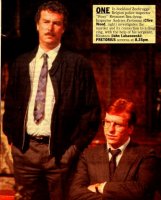