It's so Last Century » Lounge » Television Shows » For The People

The Right Side Of The Law

William Shatner stars as a strong-willed assistant district attorney determined to protect soclety by the prosecution of evil, in For the People, a new weekly dramatic series which is beginning its season on the New Zealand TV scene.

The series focuses on the innocent people involved in and affected by crime, and the men whose duty it is to prosecute the law-breakers. The stories bring into sharp relief some of the thought- provoking problems affecting everyday society.

Shatner, in his role as David Koster, portrays a strong-willed young prosecutor whose dedication to his work subjects him to many and varied stresses. Unlike a defence attorney, whose main concern is with his client, Koster has a responsibility not only to his community but also to the accused individual

Award-winning Jack Priestley is director of photography for the series, which is filmed in New York. For the People utilises the active camera, a concept new to television. The technique brings the effect of immediacy, with the camera participating in the action, rather than just recording it.

Also appearing in the series with Shatner is Howard Da Silva who plays his superior (bureau chief Anthony Celese), and Lonny Chapman who appears as Detective Frank Malloy, an investigator assigned to the District Attorney's ofiice. Jessica Walter is cast as Koster's wife Phyllis.

In addition to dealing with im- portant legal issues of our time, the series is concerned with the personal problems of the main characters in their daily lives.

A back garden in New York's Greenwich Village provided an ideal location for filming and episode of the CBS drama production For the People which began its season on New Zealand channels from WNTV1 last September 1967.

It was ideal, that is, in everything except the weatherm which provided heavy rain instead of the hoped-for sunshine. The director decided to adjust to the conditions and filming was completed with the help of umbrellas.

Series star William Shatner portrays a district attorney whose hobby is photography, He is shown focusing his camera on he televisions wife and co-star, Jessica Walter, watched by members of the production crew and as he is seen by the production camera.

Between takes, Shatner and Miss Walter donned coats for for added protection from the elements. 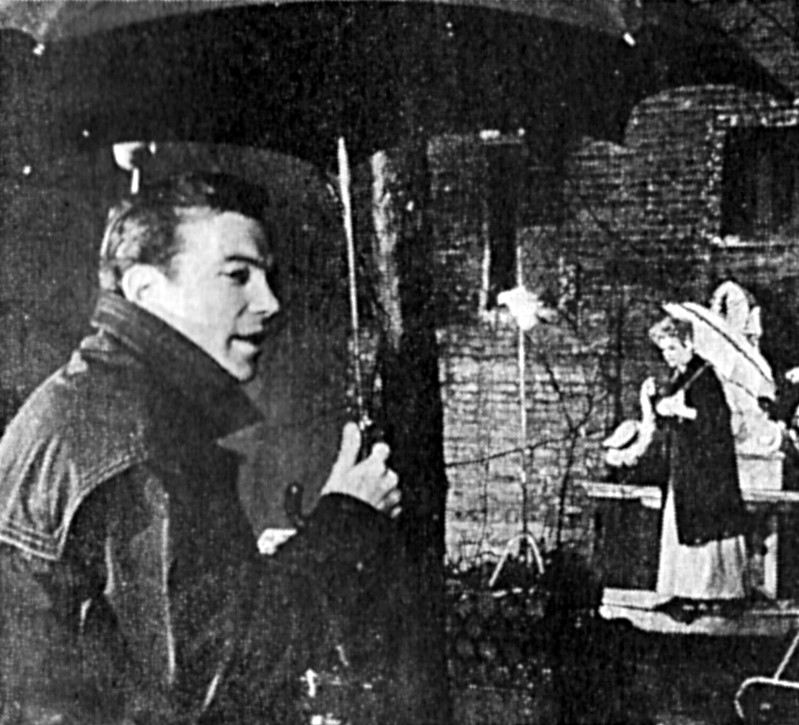