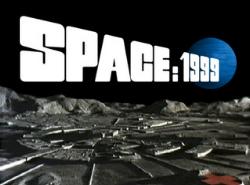 The dark side of the moon explodes, sending it shooting off into space, where the crew of Moonbase Alpha get to meet a new alien civilisation every week. The special effects standup even today as quite magnificent, but the rest of the show needed work. Daza gave a friend Paul his copies of Series II on DVD; here's his review:

I was quite pleased to have received the DVDs, as when the programme was first shown in the mid 70s I thought that it was very cool and sophisticated. Sadly I've watched some of the episodes off the DVDs, I cannot believe just how cringe-inducing this programme actually is. Poorly written, poorly edited, and badly acted. The wooden marionettes in Gerry Anderson's other shows had more character and feeling than most of the people acting in Space 1999. The women characters didn't wear Gold Lama Jumpsuits (as least not what I would call a jumpsuit) but instead a type of two-piece knitted beige uniform. So they had bad actors, acting in beige uniforms, in a beige coloured set. Not a combination that recommends itself.