I spoke to a judge in his robing room in the heart of London's Soho and found that he carried an interesting alias . . . if this sounds theatrical then you have hit the jackpot: the robing room was a dressing room in the Cambridge Theatre, the judge the leading character in John Mortimer's new play, The Judge.

And now the matter of 'aliases; the Judge is played by that top television star, Patrick Wymark, best known as John Wilder of The Plane Makers, and The Power Game. Patrick comes from Lincolnshire and his proper name turns out to be Patrick Cheeseman . . . it was not such a bad surname,says Patrick now, but he and his Wife decided when I was youngthat it could be improved on for a stage career. Why Wymark? The 40-year-old actor explained.

'My wife's grandfather was the short story writer W. W. Jacobs- the initials stood for William Wymark Jacobs. I don't know where the Wymark came from, but my wife said Wymark's a good nameso I said Yes, that'll do -and that;s how I got my name.

Patrick never gets called Cheeseman today, although he did not have to change his name by deed poll You can change your surname any time you like-his four children are all known as Wymarks.

Since he finished work making the first 26 episodes of The Power Game, Patrick has been enjoying working back in the theatre with his hit role s The Judge- It's a role I enjoy doing. I think it's a good play. It's hard work but that is what we are here for...

He was delighted to hear that after its success in Britain, The Power Game was also winning favour with New Zealand's viewers. Will there be a second series for a third comeback for John Wilder, I asked?

The television company would like me to do another series, I think. You know, there has been talk about it... but no decision has been made. I am not under contract at the moment.

If Wilder came back he would have to go on further. l am not going to let the cat out of the bag about what happens at the end of The Power Game but the construction company does break up and there is a door left open so that this character Wilder can go on to some other industry or some other activity.

I don"t think that the character of John Wilder will have retired or given up really.

Would Wilder possibly go into poli- tics, become an M.P.? No, no. I don't think he is really a politically minded fellow. I don't think he has any ardent feelings of social conscience at all, which I think an M.P. must have. No, he'd never be a Member of Parliament-that's a different sort of power game, that.

Perhaps some of Wymark's success as the peppery strategist, power seeker and boardroom manipulator may be attributed to his acting methods which are not based on popular theory that actors should underplay emotions and actions on TV compared with a stage performance.

I have never really agreed about this thing of underplaying . . . I think acting is concerned with communication and that the more direct you make it, the more real, the better it is. I think there is always a danger in television of thinking that you can get away with things.

Actually the television camera is absolutely merciless, and I cringe most of the time when I see a play- back of The Power Game, Plane Makers and things I have done on television because I think 'oh hell I wish I could do that again and then I could get it better.' Whereas in the theatre you do get a chance to do it again-night after night.) In television, once it is in the can, you can't do it again.

But he gives the credit to Wilder's papularity to the scriptwriters.- The real reason for any success a series has is the fact that they're well written. You can't do anything without good scripts. We have a very good team of writers and Wilfred Greatorex the script editor and Rex Firken the producer of the series . . . and we have been fortunate to have always been able to get a good level of actors in to play the various parts that come up. 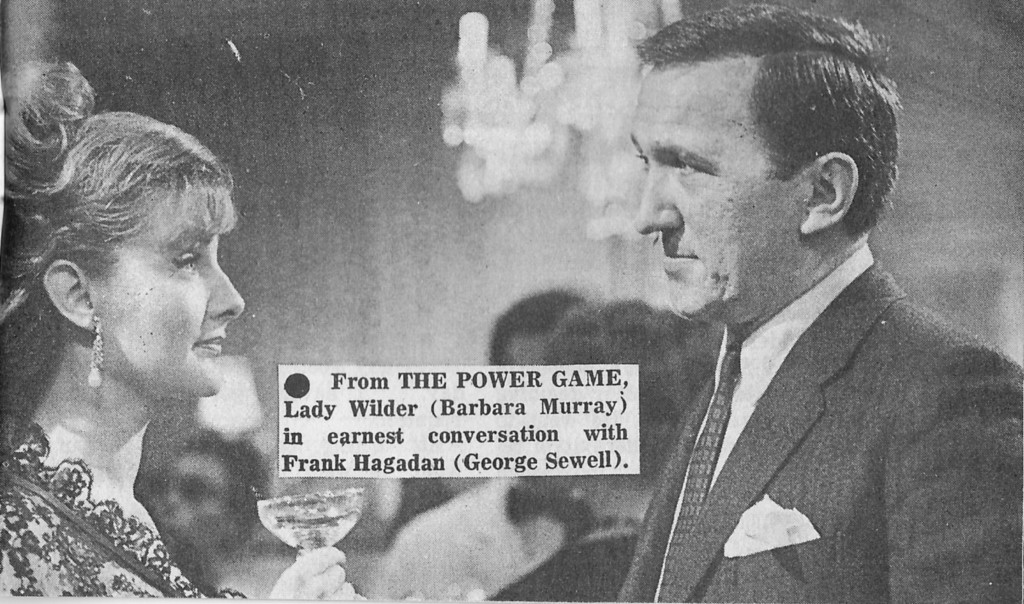 Biographical Details About this Man Wymark

PATRICK WYMARK, (real name Patrick Cheeseman), comes from a Lincsolnshire Catholic family. His father had a shop that specialised in church decoration. They were well off, but young Patrick saw a good deal of poverty about him.

He considered becoming a priest and went to St Cuthbert's School in Durham, but left at 16 after deciding against a church future. He went to Edinburgh University where it is re- ported that he drank too much McEwan's Ale.Then he was com- missioned in the Royal Naval Volun- tee Reserve and set to minesweep- ing in the Mediterranean from 1944 to 1946.

After being demobbed he decided to try teaching and found himself at a Yorkshire primary school- I was never any good at that,he says to- day. I haven't got the patience required.

His acting career really began when he went on irom teaching to London University, where he graduated with English and History Honours. I did the university production of Anthony and Cleopatrawhich one has to get out of one's system as a student ... and which I found impossible to cut, so that it ran for four and a half hours! Then I had a disagreement with my professor on it, primarily I think because I did not use his edition of the play, and as a result I slammed out of his room, made an application (I was coming to the end of my time at university) and went to the Old Vic School.

Patrick was there for two years, then in the 01d Vic Company for another two and a half years. It was at the Old Vic School that he became friendly with New Zealander Clive Revill (recently very successful as a film star and now a great success as leading man in the Broadway musical Sherry!). Later they were together at Stratford for two seasons- We are very old buddies,says Patrick.

In 1954 he went to California as artist in residence at Stanford Uni- versity, and from 1955 to 1959 he was at Stratford-upon-Avon.

In 1959 he joined the 59 Theatre Company playing at the Lyric Theatre, Hammersmith, London. Patrick and two other men-all of them in their thirties-were members of the company and each of them are now household names in television. The other pair Patrick McGoohan ( Danger Man), and Rupert Davies ( Maigret). At that time the three were each receiving about £30 a week.

Today Patrick lives with his American wife Olwen and four children (Jane 15, Rowann 12, Dominic 7 and Tristram 5) and spaniel Hector in the ground floor of a large house which he owns on the edge of Hampstead Heath in north London.

At home he is a hi-fi addict, does The Times crossword, likes having huge numbers of people to Sunday lunches.

Does he watch television in his leisure hours. Well of course I am working in the theatre now-I don't watch a great deal because I don't have the time. When I am home and there is TV on I watch it-mainly I sit with the children and watch Children's Hour.

It's a far cry from Wilder's board- room! 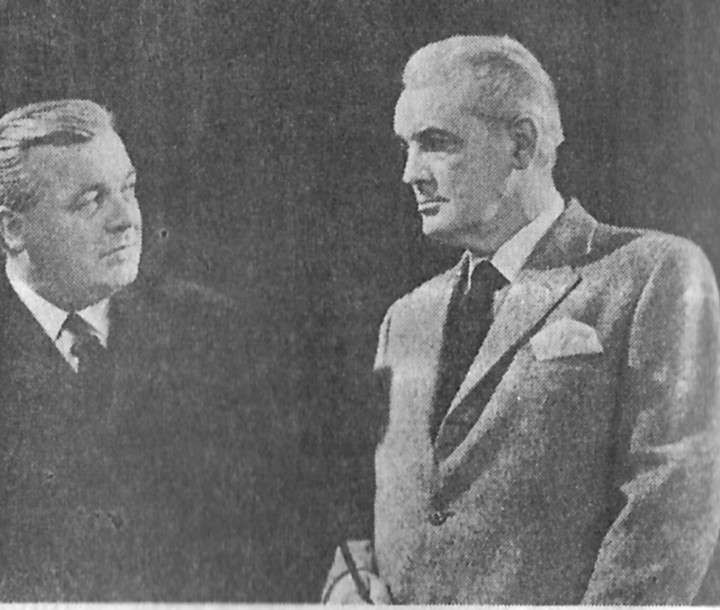 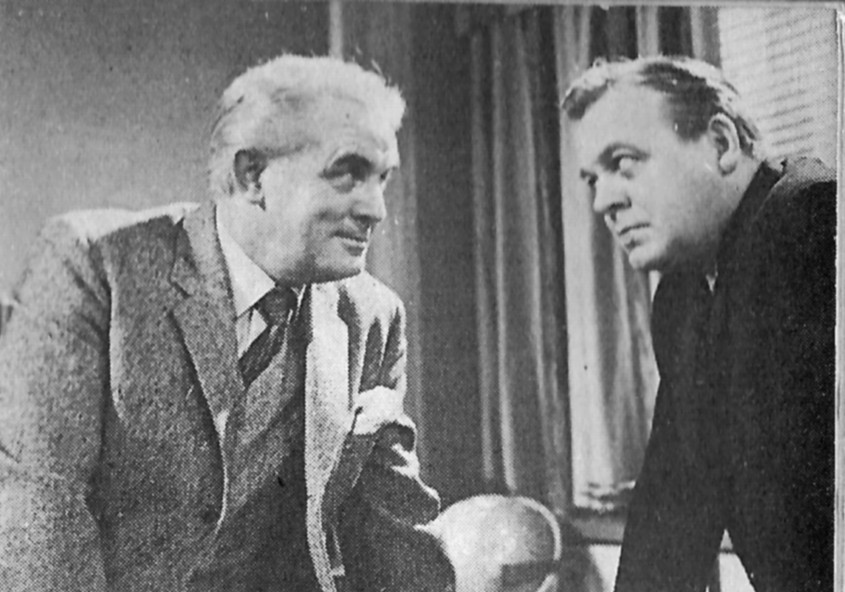 another clash in the top circle of office politics 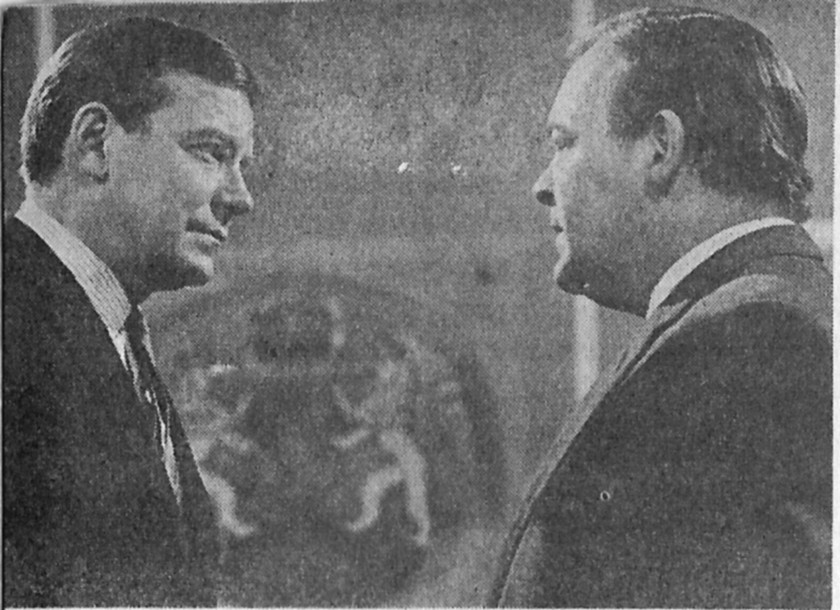 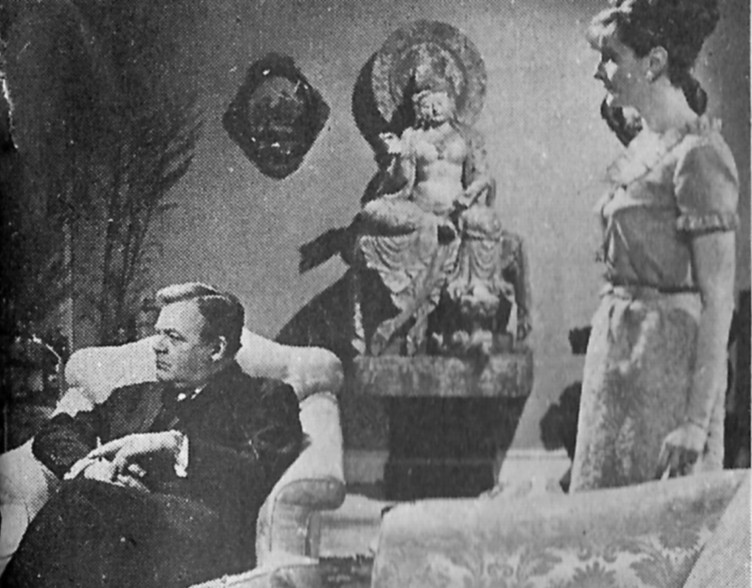