WHEN THE AMERICANS move into Morocco, to build five gigantic N.A.T.O. Air Bases, Joe Rivers decides to move in too. He is taken on by the Personnel Relations section of BALA, the engineers co-ordinating. the contract; a job involving a folder full of odd-ball assignments-from five-star welcomes to organising deer hunts-designed to keep U.S. exiles happy in their work.

As an Englishman, Joe has no affiliations whatsoever in Morocco and is content to remain a detached observer of the diverting antics of big-time construction on the one hand, and the seething hot-bed of Arab-French politics on the other.

Then one of his Arab drivers is brutally murdered and Joe is brought face to face with creeds that men are prepared to go to any lengths for. He realises, too, the complete and utter helplessness of the 'so-called liberal individual' caught up in the bloody threads of treachery and intrigue where any end justifies the means. He has come to Morocco as an onlooker, uninvolved, for 'laughs and money'. When people die in the streets, a good seat on the gravy train is no longer enough. 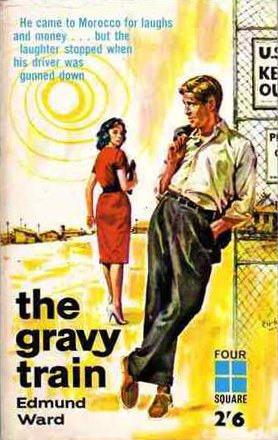 Summer in Retreat, Mr. Edmund Ward's first novel, was a witty account of an artist's misadventures in a provincial town. The Gravy Train, his second book, is even more amusing. It is also rather a strange achievement for an English author as it is written very largely in American idiom, Joe Rivers, an Englishman and a rolling stone, is taken on by the Personnel Relations section of B.A.L.A., the engineers co-ordinating the contract for building five gigantic American air bases in Morocco. He is a detached observer and his appreciation, in the full and true sense of the word, of what goes on shows an advance on anything Mr. Ward was able to offer in his first story. The extraordinary technical efficiency, pomposity, hospitality and friendlness of Joe's American friends are most happily observed.

The Gravy Train should be read if only for the picture of J. B. Grimsdell. the jargon-ridden head of Joe's department. Mr. Ward excels at this kind of quietly sardonic portraiture. He is much less happy when he comes to the thorny bed of French-Arab politics. There is, for instance, the murder of an Arab driver introduced almost casually which drives Joe out of the country, realizing that as a "so-called liberal individual" he is helpless and better off in Paris. A good seat on the Gravy Train is no longer enough for him, but before this occurs Mr. Ward has thoroughly justified Joe's Moroccan interlude.