It's so Last Century » Library » Books » Summer In Retreat 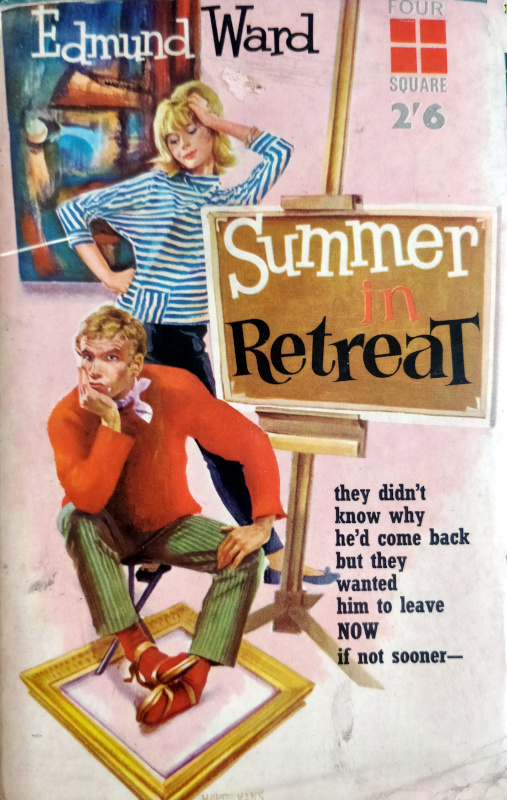 There was a general sigh of relief when Eames shook the dust of his home town off his feet and set out to seek a painter's fame in London. It was a small town with a low opinion of artists which Eames' extravagantly wild behaviour had done nothing to modify.

After five hectic years in a succession of garrets Eames feels the need for breathing space; a period of calm in which to devote himself wholeheartedly to his painting. He decides to return to the one place which can offer him the tranquillity he seeks. The job of teacher at the recently-endowed Art School Extension seems to offer security as well.

Reactions to his reappearance are varied. His friends are glad to see him but wary. Others prophesy a rapid decline in law and order. Eames rents a room and begins to work. He persuades the benefactor of the new school to commission a portrait, hoping to use it as a reference for the teacher's job. He hammers out material for a one-man show at the town's part-time art gallery. He tries to mind his own business.

But there is no escaping the backwash of the past. Friend and foe alike persist in seeing him as he was, not as he is. Maggie Garland, a former flame, persuades herself that Earnes has returned for her sake and tiresomely persists in trying to rekindle long-dead fires. Jawbone Belcher, her fiance, sees him as a dangerous rival and is out for his blood. Old cronies like Davy Blow, the local Satchmo of the Salon de Dense, make unwelcome appearances shattering his carefully built-up facade of respectability and integrity. Eames desperately tries to extricate himself from one compromising situation after another, none of them of his creating, until by the end of summer he is not so sure that his chosen backwater is the peaceful haven he had thought; nor are his friends; nor is the rest of the town.

Fans of Edmund Ward's scripts writing will find much to enjoy in this amusing story of a man returnning to his home town in search of a measure of financial certainty after an adventurous and Bohemian existence to date. Trouble is the towns folk won't let him forget his wild ways.

The dialogue and characters are amusing, and as is usual with Ward's work it is full of humour and wit, but for much of the book I found it a bit too much, as though Ward was trying too hard to breath life into his first novel. All the funny come backs, amusing anecdotes, character portraits, and meditations on small town life crowd the characters out of their own plot, and the reader never gets time to ease into the story.

Ward waits till the end of the story to give the novel some emotional weight. It comes too late to balance the rest of the novel's tone and frenetic pace, but it does add a satisfactory grounding to the tale which before then had occasionally veered close to farce.

With only a few passages of beatnik-lite dialogue to date the book it holds together well after nearly 60 years, due to the timelessness of the basic set up; home towns will always seem stuck in time for those who have returned to them after making their way in the world.

While certainly not an essential read, this book is a diverting one for those who enjoy sharp dialogue. I think it could have made for an amusing comedy of manners TV series; a cross between Last of the Summer Wine and Shelly. It certainly hints at the success Ward would later have in his career as a script writer.