It's so Last Century » Library » Books » Days Between Stations 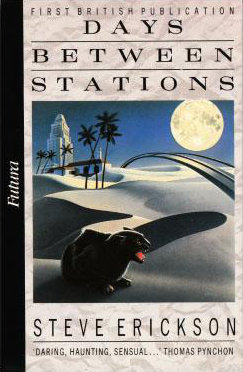 In a world of cataclysm and unraveled time, a young woman's face, a misbegotten childhood in a Parisian brothel, and the fragment of a lost movie masterpiece are the only clues in a man's search for his past. That journey takes him from a Los Angeles where freeways are buried in sand to a Europe where the Seine is frozen, bicyclers race in the empty canals of Venice, and forbidden secrets intercut like the frames of a film.