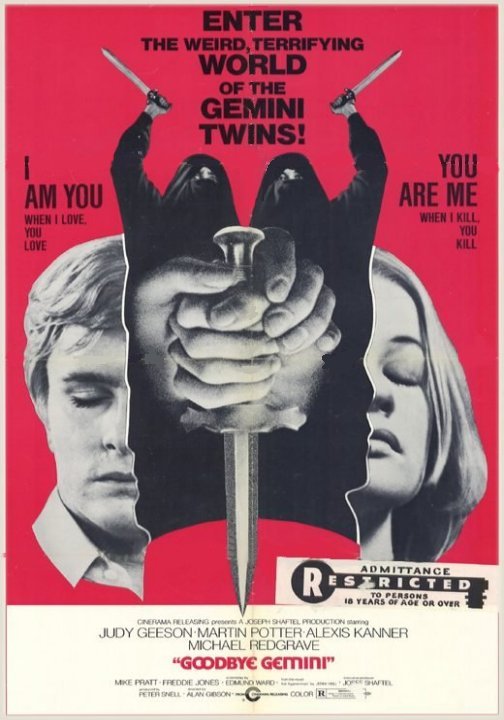 This has everything thing you need for a sixties film: swinging London, gangsters, sexually ambiguous characters, blackmail, someone from the Redgrave acting dynasty, pop music, a title related to astrology, and creepy twins.

In the age of Aquarius, the Gemini twins share everything: love...men...and murder!! Jacki (TO SIR WITH LOVE's Judy Geeson) and Julian (SATYRICON's Martin Potter) are 20-year-old twins with an unusually close relationship. Their bizarre fantasy world is shattered by the arrival of Clive, a London small-time criminal with a massive gambling debt. As the twins become exposed to the seamy underbelly of the swinging '60s London nightlife, their relationship becomes strained and twisted. When Clive attempts to blackmail Julian, the twins take decisive action in this eerie, unsettling tale where not even the bond between siblings can predict the outcome. GOODBYE GEMINI is a disturbing look at the relationship between twins...and just how far they will go to protect one another!

Special Features on the DVD from Scorpion Releasing include:

The soundtrack was by Christopher Gunning, and included the funky Tell the World We're not in by The Peddlers.

Extraos Gemelos - the view from Mexico