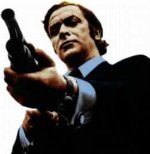 Get Carter is a 1971 crime film directed by Mike Hodges.

So hard boiled that he turns to granite before your eyes, Jack Carter (Michael Caine) is the coolest man on the planet in this grim and nasty tale of revenge in the seedy criminal underworld. Based on a terrific book by Ted Lewis, this film rates as a classic crime tale. It's a brutish and deadpan film that makes Lock, Stock and Two Smoking Barrels look like a Gilbert and Sullivan production. The DVD release is well worth checking out, with great transfer and commentaries.