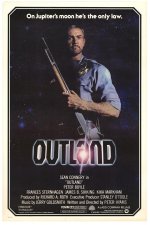 Outland is a 1981 science fiction movie starring Sean Connery. Very heavily based in the plot of the western film High Noon, Outland shares with Alien a very matter of fact approach to the future. No Gold Lamae Jumpsuits here, instead there are dirty overalls and space suits that haven't just been delivered from the factory.

The film is great to see on the big screen, and can be picked up cheap as chips on on DVD. Unfortunately the dvd is a bare bones release which is a shame because even though there's nothing original here plot wise, it's a well mounted production. Connery is in his element as the washed up federal marshal given a dead end job because the powers that be expect him to hide in the bottom of a bottle and leave them to do what they like. The interaction between Connery and the tough as nails station doctor (Frances Sternhagen) is full of life, while the interactions between Connery and his screen wife are too schmulzy and unbelieveable.

Outland also scores on the last century Sci-fi film charts as its novelization was written by Alan Dean Foster, the soundtrack was by Jerry Goldsmith, and it was directed by Peter Hyams, all firm favourites round our home.

Good news, Outland was released on blue-ray July 10, 2012 with audio comentary and a better transfer than previous releases.

Check out some details regarding model making for the film.

This was first released in 1981 as an LP, and has seen various re-releases over the years.