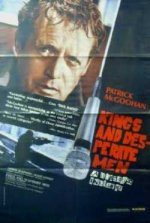 An urbane radio talk show host - "the man you love to hate" played by Patrick McGoohan - is pitted against a terrorist who holds the host hostage in his studio as the terrorist seeks justice for a friend he feels was wrongly convicted.

Script by Edmund Ward, The file was produced, directed, acted and co-written by Alexis Kanner. Kanner and McGoohan had worked together earlier in several episodes of The Prisoner.

While filming took place in December 1977, it did not screen until the 1981 Montreal World Film Festival. During the late 80s Kanner sued the producers of the film Die Hard claiming that they stole the idea for that movie from this film, but the claim came to nothing.

In 1994 on the alt.tv.prisoner newsgroup 2nd DP Arden Ryshpan recalled the filming was fraught with difficulties:

Kings and Desperate Men was probably my 3rd or 4th job in film - I'd just turned 19. Alexis Kanner (the director & producer) and my father (both my parents work in the industry) have known each other since they were teenagers. Alexis hired me as his assistant, and I wound up doing the casting, being the 2nd AD and hiring the production manager... (it's usually the other way around, but Alexis didn't know anyone in town)

When we started looking around for someone to play Patrick's wife, I said that we needed " a Margaret Trudeau type". Alexis said "Great. Get her." She was, of course, the estranged wife of the Primeminister of the country, and was all over the news here after her wild party weekend with the Rolling Stones. I hid her agents phone number from Alexis for a week... It was the first of many things to go very, very wrong on that film. Alexis took pills to wake up, pills to go to sleep and scotch in between . Not an easy situation.

Alexis wouldn't make decisions - about anything. The first day of shooting came, and he hadn't made a decision on who was to play any of the kidnappers. Utterly distraught, I went to the 1st AD and asked him what the hell we were going to do. He told me to call 4 of the actors we had auditioned for those roles, and which ever 2 answered their phones first got the roles. And that is precisely what we did.

After 3 days of shooting, we stopped issuing call sheets. There was no point -we weren't shooting anything that was on them. We were shooting miles of footage, but none of it seemed to come from the script.. Patrick and Alexis were doing their own thing.

That was about when the 1st AD took to wearing a referee's shirt and a whistle.

Patrick had a fondness for booze at the time - I have no idea if he does now - and he became difficult to work with after lunch. The AD gave me the responsibility of making sure that he didn't sneak a couple on the side, which meant practically following him to the bathroom. Needless to say, I never caught him and he certainly had a few...

Patrick doesn't suffer fools gladly, and he took every opportunity to make Margaret's life miserable (and therefore mine) The place was crawling with RCMP folk, particularly when the children came to visit. It made us all uncomfortable (and put a damper on the crew's extra- curricular activities) and I don't think that Patrick liked the fact that she was the centre of attention. There was the day that he "fired" her - she was in tears, the crew was in stitches, and I had to take her aside and tell her that, no - Patrick didn't have the authority to fire her... He got a real kick out of that. He used to stalk the hallways muttering about "that woman" Then there was the time that he told her she couldn't act and shouldn't be in the film - which prompted her to throw a fit. She made a run at him and he grabbed her by the throat. I started running to get the guys, but they had heard one hell of a commotion coming from the makeup room and were rushing down the hall. One of the guys pulled Patrick away from her, grabbed her and tried to wrestle her down the hall into the elevator to take her up to her room. (We were shooting in the Four Seasons Hotel where they were all staying) They took her up via the service elevator, and Patrick raced up the stairs, so that when the elevator doors opened he was already standing in the door of his room and started taunting her again. She went for him and he slammed the door. Margaret then started kicking at his door with these gorgeous red suede boots she always wore and calling him every name in the book. And we could hear him laughing on the other side of the door. For some strange reason those boots have stuck in my head all these years.

Days went by. and we didn't seem to be any closer to getting this film in the can.

The walls of the hotel hallways were covered in styrofoam so we could move equipment through without damaging them. Slowly but surely, graffiti began to appear. " King and Desperate Crew" for example.

If I were to cast the voice of God, it would be McGoohan. When he bellows, it shakes the rafters. I was somewhat intimidated by him at first - being a big fan and being inexperienced to boot. He was on me about something one day, and the 1st AD called me on the walkie-talkie. I asked Patrick to hang on a second while I responded, and he grabbed the walkie out of my hand and yelled at me to listen to him. I don't know what came over me, but I'd eaten all of his shit I was going to eat and I grabbed it back and yelled "F--- off Patrick! The goddamn AD is calling me and I'm gonna talk to him so you're just gonna have to wait" And from that moment on, we got along just fine!

There were a couple of other unpleasant incidents - the cinematographer tried to throw Alexis out the 32nd floor window of the hotel and for a moment no one moved to stop him - there was the time Alexis had too much to drink and passed out in one of the other actress's rooms (she left immediately and stayed in Margaret's room) and the next day Patrick was telling everyone that Alexis had spent the night with her, which prompted her to run off in tears and lock herself in her room, It was, of course, MY job to get her to come out...

Patrick was mean, uncooperative and sexist. HOWEVER, on the last day of shooting....

We were doing one of the last scenes, where Andrea Marcovicci mourns over Alexis' body as Patrick walks out of the radio station. We'd basically shot the film in chronological order and this was the last shot before we were actually finished. The shot was without sound so the crew started to pack up. As Andrea is crouching over the body, suddenly Patrick steps in and starts to direct her. And it's magic. You can feel something happening. The whole crew stops and is watching. Patrick starts to take her through this whole emotional process. The cinematographer just keeps the camera rolling and we're all standing there mesmerized. Here is a really good director at work!!! He keeps her going until finally the cameraman quietly says that he's out of film. Andrea sort of pulls herself together and gets up and starts to walk away. Patrick says "That's right dear, now you go and have a good cry". Well, she let out this yell of frustration, looked around her for the nearest heavy object and heaved this huge glass knick-knack at Patrick's head. He ducked and it smashed a huge mirror. Then she ran out. The 1st AD said " Uh... that's a wrap..." And the filming of "Kings and Desperate Men" came to an end. No one came to the wrap party.

Why he had to go and do something like that I will never know. It was perfectly clear to everyone on that film that, despite the fact that he was as big a pain in the butt as had ever existed, he was a fine actor. And in the last 5 minutes of shooting, he had shown that he was a GREAT director.

He gave me a dozen roses and a thank you card at the wrap party - which I have kept. I gave him a brass penny farthing - lord knows where I managed to find the thing... But the nicest thing he said to me one day when he was "in his cups" was " You know Arden, underneath it all, you're really a man." It occurred to me to smack him upside the head, but I realized that it was actually an enormous complement coming from him and in the only way he knew how.

Many years later, I worked on a film with Charles Jarrott and we contemplated hiring him. He would have been wonderful in the role, and since it turned out that Jarrott had worked with him,(on that film with Vanessa Redgrave playing Mary, Queen of Scots and Patrick playing her half-brother James) he knew what he would be getting in to and said he was prepared to deal with McGoohan. Unfortunately, he was unavailable. But given all the problems we had on that particular film, Patrick might have been a tad too much. (a horrible, tragic death, a fire...)

Despite the problems, I have very fond memories of that film - it makes much better stories than many others I have worked on since. When I saw it at the premiere several years later (Alexis spent almost 2 years in the editing room) it actually wasn't a bad film. He was trying to do something stylistically (particularly with the sound) and he tried to make a "straightforward" hostage drama into something more challenging intellectually. I haven't seen Alexis since then - he was living in New York at the time. While I have no desire to pick up my phone and hear his voice, my dad and I do wonder where he is and if he is okay. Despite all that went on, I am rather fond of him in a strange way. I've stopped working in production and am now the Eastern Regional Executive Director for the ACTRA Performers Guild, the union that represents actors here in Canada

The film was released on VHS but has as yet to appear on dvd or in any other digital format.