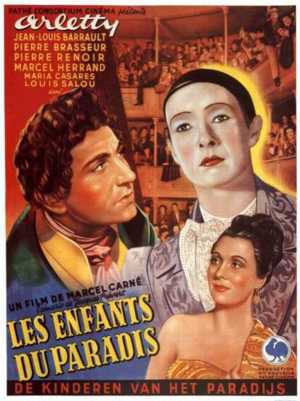 Les Enfants du Paradis (The Children of Paradise) is a film of magnificent beauty where every scene and every character plays an important role in a saga of unrequited love. Most of the films on this site will entertain you, but this film does so much more. Even though I've seen it three times I'm still totally enthralled. Looking around the net for references to this film I was pleased to see the term Greatest film ever made is never far from people's lips. I wish I was this film; witty, beautiful and unforgettable. The fact that I'd also have to be tragically lovelorn would be a small price to pay.

Lacenaire is a playwright, thief and murderer whose strength of character and shear wit make him a memorable character in memorable film.

As portrayed by Marcel Herrand Laceaire cuts a fine figure. He is a dandy, immaculate in ruffled shirt. His boyish curls surround a face of cruel arrogance. We first encounter him as he is engaged in employment as a public scribe, putting pen to paper in aid of an illiterate man who hopes that a letter containing confessions of love and the promise that he will not strike her again will win back his wife. Almost at once we grasp the character of Lacenaire, learned and articulate but scathing as he calls his client an idiot as soon as the man has left the store.

There follows a conversation between Laceaire and the feme fatal of the film, Guernsey. Laceaire, like many of the men in this film, is in love with Guernsey but she wants nothing from him except his occasional company. His constant talk amuses her but she senses that danger dwells within his pride and aloofness; Your head is too hot for me, and your heart too cold. I'm afraid of draughts In what seems a defensive response Lacenaire presents to the world a mask of ironic detachment. He does not want others, especially Guernsey, to see his emotions raw. He vainly attempts to remain aloof from his feelings: I am not a man like other men, My heart does beat as theirs He alone can stand back from his heart and see what is going on, see the folly in his disappointment and move on, at least, that is what he tries to tell himself. For, despite his cold logic, throughout the film we can see him for what he is, a man driven by jealousy and feelings of rejection just as much as any other of Garance's hopeful suitors.

Through out the film Laceaire appears at key moments to drive the narrative along, observing events and playing characters off against each other as part of the various criminal schemes that he enacts. His botched attempt to rob a debt collector throws suspicion on Guernsey, which drives her into the arms of another of her suitors, the Count. Thus Lacenaire exiles himself as well as Guernsey from the city.

In the second half of the film Lacenaire returns to Paris, intending to murder Frederick, an actor and a suitor of Guernsey. In confronting Frederick he is so surprised by Frederick's open generosity that he spares his life and they seem to strike up a friendship.

Amongst the spectrum of reactions to love that this film presents, Lacenaire is the personification of the vindictive side to human nature. Baptiste, the mime, falls into melancholy and pines for the love of Guernsey while Laceaire bottles his resentment up, adding it to the general distrain he holds for human kind. In this he as much a victim of his broken heart as Baptise, and by the end of the film he seems willing to admit that he is not so different from other men after all:

And yet it's the same wood beneath the poor man's hat and the king's crown. The dead wood of love which rots under the skulls of those who are not loved

The irony of his role of public scribe is finally seen, he can create apologies and catalogues of love for a public who cannot even begin to conceive of such feelings of devotion and remorse but he himself is just as unable as them to give life to these words. He is the man who knows what to say, knows the language of love but is to proud to let himself be caught up in its emotions. His superiority and stubborn pride mean he is unable to admit to the emotions he feels and thus fails to learn from them. Instead his desires drive him to provoke disaster for himself and those round him.

Even so his is a magnetic personality with a constant stream of witty retorts to all those he meets. There is a dignity to him; how he strains to keep his self respect intact, suffers no slight, and is calm enough to avoid being dragged quickly into duels. He schemes and plots and finally gains a terrible revenge on those who he has crossed paths with, but in the end he does not seek escape:

After all a man like myself cannot decently be expected to run the risk of being executed by a provincial hangman.....Absolutely not.

In his first scene Lacenaire had prophetically announced the fate that awaits him: I shall walk with my head held high, until it falls into the basket on the other side of the guillotine, of course.

His pride and his heart has lead him there and though we, like Guernsey, are wary of his coldness of spirit we cannot help but be impressed with his unwavering sense of style. 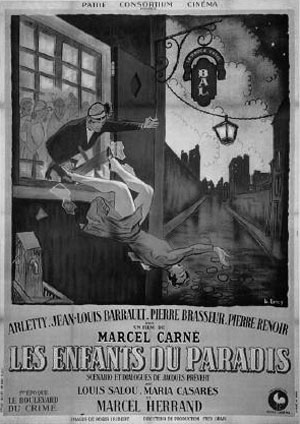