Callan: Under the Red File 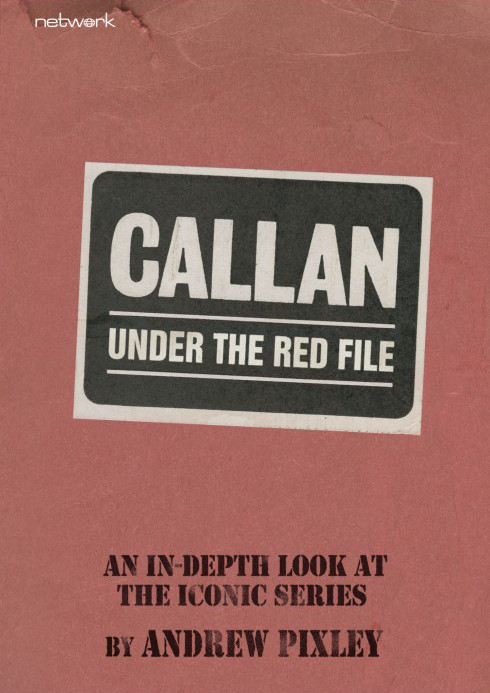 Originally intended as part of the seemingly abandoned Definitive DVD box set, this book was released April 2015, no doubt in order to beat The Callan File onto the shelves. It's a cut-throat world in archival TV....

As a devoted fan of the series I just had to order this as soon as Network's announcement of its release hit my inbox, and it went straight to the top of my reading pile. The first thing that strikes you when you get the book in your hands is the lack of illustrations; all we get is one rather generic head shot of Edward Woodward on the back page. At 370 pages of pretty solid text we're certainly not getting short changed, but at the very least a gallery of the main players would have helped to keep track of all the names.

The book is divided into two sections; a chronological history of the series outlining the overall story arcs and production history, with chapters for the pilot movie, each season, the film, and the radio adaption. These involve discussion of the background behind the making of the seasons as well as other activities of the main cast and crew, putting things like the publication of the books and short stories into the timeline of the show as well as the careers of James Mitchell and the actors before and after the show, quoting extensively from a wide range of contemporary and some later interviews.

This history of the show is followed by a detailed episode guide in which each missing episodes has a 1½ to 2 page plot synopsis, and all episodes have cast details (included some uncredited folk), detailed production diaries with details of scenes cut from the broadcasts, filming locations, articles and promotion materials released near broadcasts, and quotes from contemporary letters to the editor showing the public responses. There is also a six page crew credit section that seems to cover all episodes collectively.

All this adds up to an exhaustive history of the show supported by lots and lots and lots and lots and lots of interesting quotes; it even lists the upcoming book on the show in the further reading section. I was initially annoyed that the book lacks an index, but thinking it through there's just so much detail here an index would have become unwieldy and the strict chronological approach means most details can be quickly traced. It's only in the areas of the short stories or related musical releases that the book could have benefited from some appendices listing them all for quick future reference.

The book focuses pretty much entirely on recounting the facts of the productions, lacking any in depth critical appraisal of the show. Those involved with the production occasionally voice an opinion on the show's strengths and some critics are quoted, and in the introduction Andrew professes to having long admired the show, but he doesn't feel the need to prove the case to the novice reader. This is probably a legacy of the book's origin as supplement to Networks planned definitive DVD collection for the series, where the readers would have been watching the show close to reading it.

Strangely the book makes no direct reference to the fate of the missing episodes, or what sort of document archive still exists for the series. Certainly it appears Andrew had access to shooting scripts and schedules for locations etc, but he doesn't list the sources; it would have been interesting to have heard more about these and get to see some photographs of a sample script to know more of the actual mechanics of the production. Equally a short explanation of the different television production techniques and technologies used would have helped.

The shear amount of detail it contains mean this book is essential for fans of the show, and make it pretty appealing to readers who are less interested in the show itself than in the careers of the two central figures of James Mitchell and Edward Woodward.

Nearly ten years in the writing, Callan: Under the Red File has been a labour of love for both Network and the book's author, Andrew Pixley. Anyone familiar with Network's releases will know our history with Andrew is a long one and he has done some excellent work for us over the years - with his books on The Prisoner, Danger Man, Public Eye and The Professionals all raising the bar for this type of archive research. Ahead of our upcoming Callan documentary [Another refugee from the Definitive Collection - Daza], you can now buy Andrew's new book exclusively from networkonair.com.

Initially a cult success before becoming one of British television's most watched programmes, Callan brought the gritty, downbeat angle of Cold War espionage to 1960s British television. In stark contrast to the glamour of James Bond and the stylized capers of The Avengers, the man known as David Callan was a highly skilled killer, tasked by the Government to eliminate threats to national security. This reluctant, conscience-wracked assassin was brought to life in a remarkable performance by Edward Woodward, cementing his popularity as an actor many years before he achieved major international success in both Breaker Morant and The Equalizer.

This exhaustive book is the definitive look at the creation, production, broadcast and reception of all four series. From its conception as a one-off BBC play, through its development by ABC Television, its success as one of Thames Television's highest-rated programmes, its subsequent ATV revival and its expansion into novels, short stories and movies - this single volume covers every aspect of James Mitchell's most successful creation.