The first series of Callan was screened in 1967 on ITV, and was an ABC Television Network Production produced by Terrence Feely

Most sources indicate that only two of the episodes still now exist. Both of these are included on Callan - The Monochrome Years, released by Network UK. 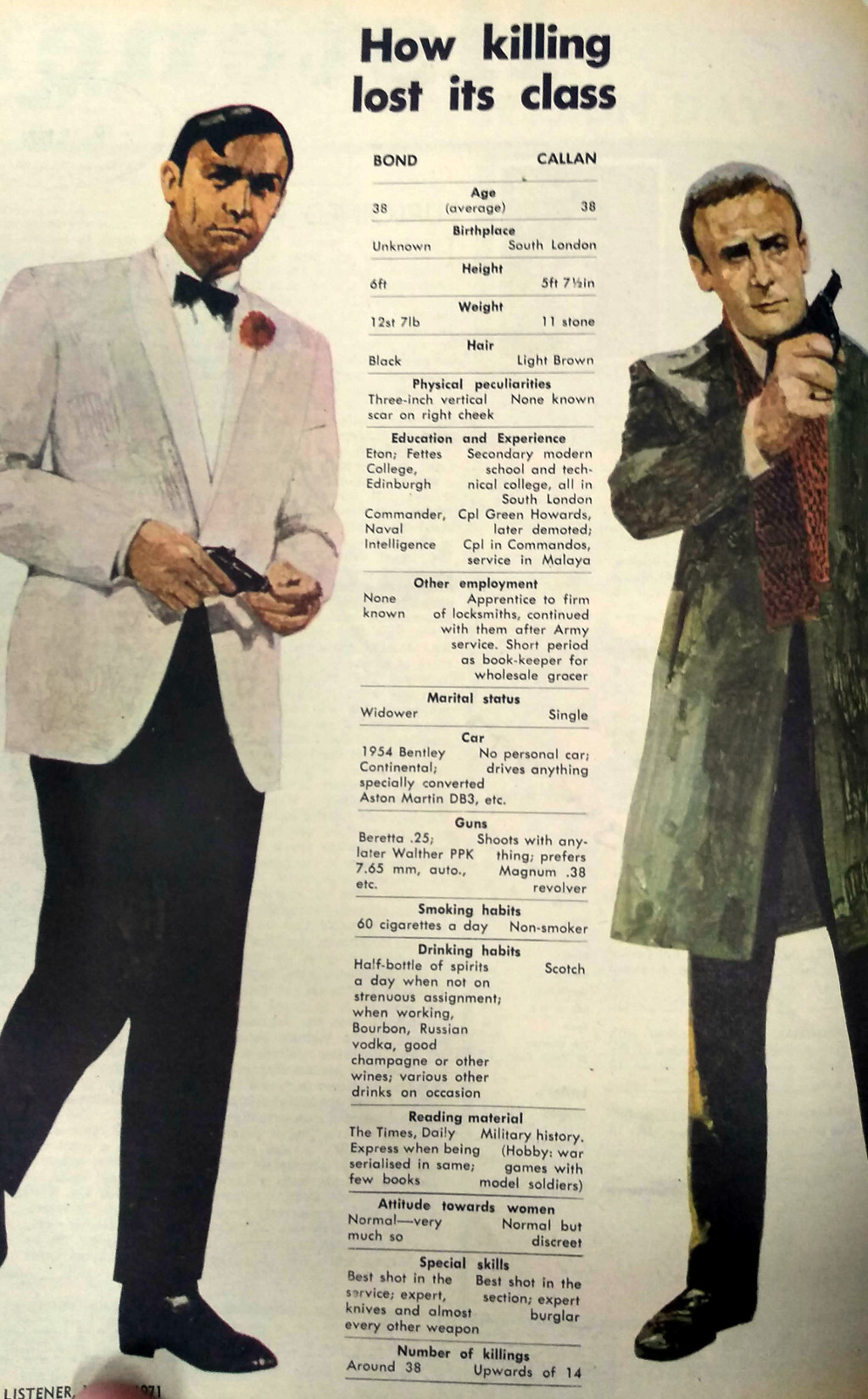 James Bond (007) became perhaps, the biggest cult figure of them all, boosted to extra- ordinary popularity by 14 books and a cluster of record-breaking films. Now a new fictional hero is due to take over: Callan, whose first series begins on Central Television this week [actually 1971], from London, Bill Hagerty presents the Bond-Callan dossier...

Ona Sunday in Britain in the mid-1960s an interviewer for a religious television programme asked a group of young people: Which figure from history would you most like to have been?

Yeah, well, he's great. Gets all those birds and kills people and that. Know what I mean?

The clerical tone may have been shattered beyond salvation, but we knew what he meant all right. The inarticulate stuttering of the witless young man confirmed what we had known all along to be true: James Bond lived.

And We wanted to be him, too. Because... well, because he got those birds and killed people and that.

That was in the Sixties. A decade during which Bonderama in the shape of books, films, clothes, toys and even cars flooded the markets and the minds of the West. But self- Identification is a capricious exercise; those of us who wanted to be Bidn - who were Bond when Imagination wrested control - We always ripe for the transfer of allegiance to a bolder, better, more excitinf hero.

Now we may find him.

His name is David Callan, as played by Edward Woodward, and he is the absolute antithesis of Bond - as, of course, he had to be. Our chart (opposite page) shows how they differ.

From the tip of the thick black comma of hair falling over his right eyebrow to the Balkan and Turkish mixture cigarettes, especially made for him by Morland's of Grosvenor Street, Bond was elegant.

Callan, Mr James Mitchell's creation for Thames television, is about as elegant as a drag artiste on ice. He wears the most frightful clothes, nondescript suits, an old raincoat, a patterned scarf and, on at least one occasion. a quite offensive dressing gown. One imagines that he would not know a roulette wheel from a doughnut, nor bridge from beat-your- neighbours-out-of-doors. Elegant, no. Why, he even travels by bus.

He lives in Branscombe Terrace. Fulham, in a flat with a special anti-burglar lock and a handful of anonymous furniture. Bond lived in a Chelsea flat with a Scottish housekeeper. Callan shoots straight. Bond did it not only with gun but with golf club, playing off nine. Attitude is another strong dividing line. Bond had dedication: Callan is a rebel and has, it seems, always been so.

Having yo-yo'd his way between private and corporal during a spectacular army career, he biffed some infantry sergeants - note the plural - and the DSM for which he had been recommended was withheld. Then he tried to rob a jeweller's safe - and spent 15 months in jail.

But it is since being recruited to Hunter's special investigation branch that the anti-social side of his mature emerged. This is the point at which the television series takes up his life. In it he tells his boss: We're all numbers, all bloody zombies.

Callan's and Bond's experiences with women, too, are very different. Bond eased a succession of ladies into bed and then married one of them, only for her to be murdered by the dastardly Blofield. Callan, very much a bachelor, keeps any romantic attachments very private indeed.

There are, however, similarities between Bond and Callan, as again there had to be if one was to replace the other as the nub of a nation's day-dreams.

Both lost their parents when young. Bond's parents, Andrew Bond of Glencoe and his Swiss wife Monique Delacroix, were killed in a climbing accident when James was 11. He was, from then on, brought up by an aunt, now dead.

Callan's mum and dad, names unknown, were killed by a V-1 flying bomb in 1944 when David was 13. He was, from then on, brought up by an aunt who has since died.

Both have been described as very handy at killing people. They would be the same age. Both have done their best work alone. Pity they never knew each other.

What, then, does Callan have that will enable him to succeed Bond as the man every man would like to be? The man every woman would like to be with? He dispenses with the upper-class trappings of Bondmanship. He also impresses by his dislike and distrust of authority, he treats Hunter in a manner most of us would like to employ when dealing with the boss, bureaucracy or the traffic warden.

But, more than this, Callan humanises hero-worship; he has passions and ideals and frustration, just like all of us. In a way that Bond never could, Callan cares. 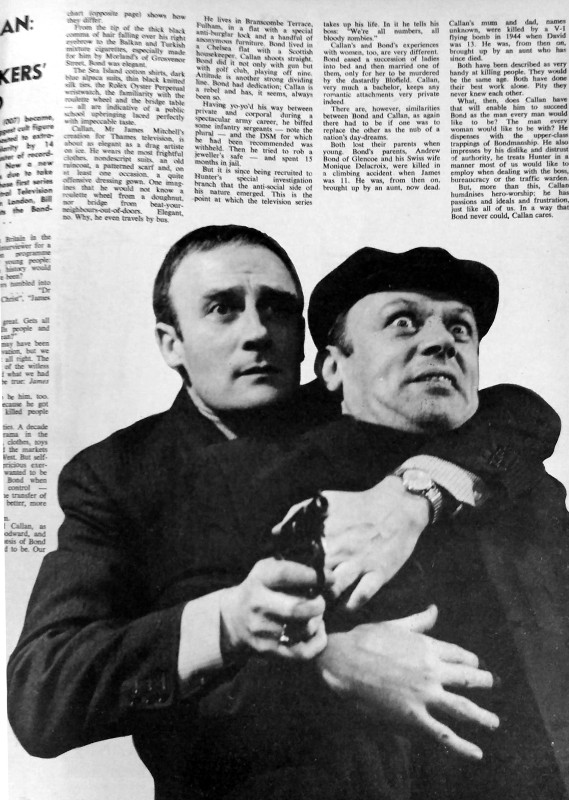