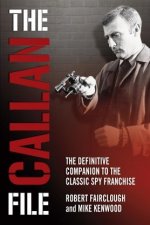 This new book is scheduled to come out at the sometime in 2016. According to one of the authors We had to move publication back due to the sheer amount of stuff we've unearthed.

UK Television audiences in the 1960s and 1970s were thrilled by the perilous life of David Callan, reluctant employee of the ruthless British Intelligence agency known as 'The Section'. Involving covert operations, blackmail, frame-ups and brutal executions, and featuring British spies who were as callous as their Soviet opponents, Callan was a dark, uncompromising series, poles apart from the glamorous exotica of James Bond and The Avengers. The series ran for four years, spawned novels and a feature film, and is still highly regarded four decades on. The lead actor, Edward Woodward, became a household name and went on to appear in The Wicker Man and The Equalizer.

The Callan File features interviews with cast, crew and writers, many offering fresh insights into Woodward's early career and telling the story of Callan both on screen and off. As well as new interviews with (among others): Robert Banks-Stewart, Trevor Preston, Hugh Walters, Kenneth Gilbert, Julian Glover and Philip Bird, and director Mike Vardy the authors have also been able to use archive interviews with Edward Woodward, Russell Hunter, Anthony Valentine, William Squire, Terence Feely, Ray Jenkins and Shaun O'Riordan. The book includes a foreword from Robert Banks-Stewart.

Covering all aspects of Callan from film, TV, books and radio.

Produced with the full co-operation and support of Peter Mitchell, the son of the series' creator James Mitchell, with exclusive access to his Callan archives.

Robert Fairclough is the author of The Prisoner: The Official Companion to the Classic TV Series, This Charming Man: The Life of Ian Carmichael and The Prisoner: The Original Scripts Volumes 1 and 2. He is a broadcaster for the BBC and ITV, has produced DVD documentaries and designed and art directed graphics for Boat International Media, as well as various magazines, books and LPs. Robert has also worked with photographer Mick Rock on an official David Bowie calendar. In his spare time, he is an international arms dealer.

Mike Kenwood works in the computer industry. In his spare time he has been a production assistant, researcher, interview compiler and associate producer on various DVD extras for companies such as Clearvision, StudioCanal, Umbrella and 2entertain Ltd., on shows such as Minder, The Avengers, Callan, The Sweeney and Doctor Who . He has written articles for magazines, CDs and websites, and was co-author of two books on The Sweeney, Fags, Slags, Blags and Jags: The Sweeney and Sweeney! The Official Companion. The Callan File is his third book.