There have been 5 novels based on the TV series.

A Magnum for Schneider

The book was reprinted under a variety of of titles, includng A Red file for Callan and Callan.

Callan is washed up. The most efficient killer in Europe is working as a book-keeper for a small, dusty merchant. But Circumstances force Hunter to employ him for one last operation. Schneider. Cheerful, friendly, affluent Schneider with his innocent passion for model soldiers. Callan hunts again And again his tool is Lonely, the most frightened little man in the underworld.It is Lonely who gets him the gun, a Noguchi Magnum 38 calibre. A magnum for Schneider.The operation is studded with leathal booby-traps, but Callan's own inhibitions are the most dangerous.

James Mitchell, otherwise known as James Munro, shows in this book what a thriller can become in the hands of a master. The tension is almost unbearable, but a humane cocern for people lift the story abov the normal run of If it moves, shoot it thrillers.

'I've done a deal,' said Callan's Boss, Hunter. 'Perhaps the nastiest deal in my career. I'm giving you to the Russians.''

The KGB had picked up the Section's top man in Russia. So far he was still alive and well. He would continue to be so now that negotiations were concluded.

'Your tading me for hi?'

It was like weighting two diamonds', said Hunter, ' Each perfectly cut, each virtually flawless. Our man in Russia weighted just one carat more. I'm very sorry.'

'You realise what they'll do to me?'

'They want you dead. They want you so badly they're prepared to give me my top man back unharmed in exchange for you.'

For once Callan was shocked. he knew Hunter was hard, he knew he was cold-blooded. But to sell one of his own men to the Russians...

So the word went round, No gun for Callan. Not even Lonely-faithful, frightened, knowledgeable Lonely-could get him one.

And three men from the KGB had arrived in London... with orders to kill Callan...

from the US paerback: Admittedly, he was a killer... the best the British had. It had something to do with the survival instinct, the patience of a hunting animal, the single, destroying blow.

His name was David Callan and the KGB lusted for his corpse - badly enough to ante up the top British spy held captive in the Kremlin.

Callan was alone out there, in the alleys and squares and parks of London, unarmed and half-blind, fair prey for three deadly Ivans.

But Callan was still the best the British had, and even without a gun he was a walking bloody arsenal...

There's no easy retirement for a man like Callan...

Callan's days with the Section were over, he'd had enough. But just when he'd found an escape from the killing an the violence, the mysterious Dr. Blythe appeared with a proposition - and Callan found he couldn't refuse. It looked like a simple kidnapping job - getting the beautiful Sophie Kollonaki's daughter out of Crete - but Sophie was involved with the KGB, and where they were, death was never far away.

Callan and the faithful Lonely found themselves on the way to Crete before they began to suspect that there was more to this than anyone was letting on...

From the US Hardback A Greek political exile named Sophie Kollonaski wants to hire David Callan, the most efficient killer in Europe, to 'kidnap' her beautiful daughter on Crete, where she is under the protective custody of Michael Vardakis, Sophie's cousin. But Callan isn't a freelance. He works for Special Branch, a secret British agency, and besides, the job is too dangerous, so Callan refuses the assignment. But Hunter, Callan's boss, tells him to accept it. Hunter sees possibilities..

There were two little favours Hunter wanted from Callan. Stealing a book from a library wasn't so bad- except that the library was in Sicily- but making sure that Gunther Lesir lost a fortune at cards was a bit more of a problem... Callan was no card sharp...

And the worst thing was, you knew with Hunter that, that wouldn't be the end of it. In no time, Callan was off on a trail that led from Las Vegas to Mexico and into the dirtiest business in the world: drugs, prostitution, blackmail...death...

First published in 1975, Smear Job was the fourth novel to feature David Callan, the iconic secret agent created by James Mitchell. Callan's trade is killing - and though it's a profession he despises, he is supremely good at it. As Smear Job begins, Callan is attempting to 'go straight' in a legitimate (almost) security consultancy business with his pungent friend Lonely, but soon he is made an offer he can hardly afford to refuse. However, when the offer comes from the ruthless Hunter, head of The Section Callan used to work for, refusal might be better for the health. In a multi-layered plot the action moves swiftly and violently from Sicily to gangland London to California and back to Europe and the only thing that can be relied on is Callan's ability to be quickest on the draw when the chips are down. 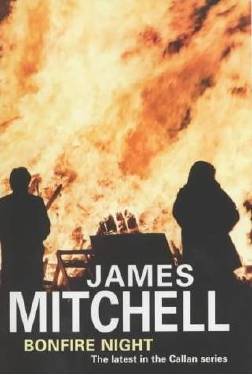 Someone is out to kill Major David Callan. As yet he doesn't know who's behind it, but he does know who's been given the contract: Hermann Voss, his ex-captor and torturer in East Berlin before the Wall came down...and perhaps the only man up to the job. The action is non-stop and ranges from London to the south of Spain before it reaches the inevitable showdown.

The book has been out of print and the first edition was commanding quite a high price on the second hand market, which in light the poor reception it has had from fans might seem unwarranted if it were not for the fact it only received one printing in a hardback edition (no paperback), with the vast majority of the print run going to public lending libraries. That might be about to change as Ostara Publishing have it listed for a new Print-On-Demand trade paperback.

The new edition comes with a specially-written Introduction by the author’s son, Peter Mitchell, describing the extraordinary circumstances under which Bonfire Night was written, towards the end of his father’s life. Bonfire Night was never really meant to be published, but rather written as a form of therapy 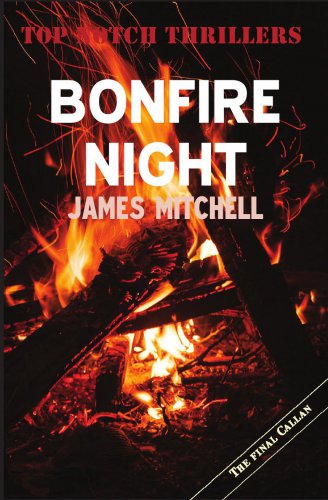 Series editor Mike Ripley said: Since the Top Notch Thrillers imprint was established in 2009 to revive and republish great British thrillers, we have had many requests from readers to reissue Bonfire Night – 'the lost Callan' – far more than for any other title and we are now proud to so. After long consultation with the author’s son Peter, I have kept editing to the bare minimum so that dedicated Callan fans can read this final coda to the Callan saga as the author intended. It is something of a 'difficult' book as Mitchell tried to merge a typically serpentine plot with major developments in the lives of his main characters. Callan is now rich, in danger of falling in love, and living in retirement in his own personal castle in Spain and the new Hunter heading the Section, is a woman. The seismic character change, though, is for Lonely, who has (thanks to a prison education course) become a computer genius and software millionaire!

But if the world of Callan seems to have turned upside down, he still finds himself having to deal with old enemies (including a vicious ex-Stasi villain who tortured Callan in East Berlin back in the day) and treacherous former allies, but he does so with all the ruthless efficiency of the Callan of old.

In his Introduction, Peter Mitchell describes, sensitively and poignantly, how Bonfire Night came to be written and I strongly recommend his account to readers.