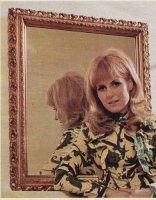 Lisa Langdon was born in Sweden, moving to the UK in 1958. While appearing in seasons 2 to 4 of Callan, she also appeared several times on the BBC's Jeckanary reading stories for smalll children which she had translated from the Swedish originals, as well as small roles in Dixon of Dock Green and Mr. Aitch. She doesn't appear to have had any acting roles after these.