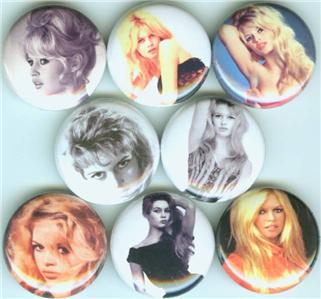 We don't condone her politics, since she is associated with the far right nationalist movement in France, but it has to be said that before she tried thinking Brigitte Bardot was one of the hottest film stars of the 20th century. Not only was she beautiful, but her French accented English was particularly endearing.

Bardot was born September 28, 1934 in Paris to Anne-Marie 'Toty' Mucel and industrialist Charles 'Pilou' Bardot. Toty encouraged Brigitte's interest in music and dance at an early age; Brigitte modeled for Elle by the time she was 15 years old.(wikipedia)

Bardot's film career started in 1952 with her appearance in a lightweight comedy film, Le Trou Normand/Crazy for Love, directed by Jean Boyer and starring the popular French actor Bourvil. She married future film director Roger Vadim the same year, and starred in four of his early films as well as his later Don Juan. Bardot had small parts in several English films, but French film remained her raison d'etre. When she retired from the movies in 1974 she'd appeared in over 50 films.

Bardot's musical career was most notable for her collaboration with French singer and bohemian Serge Gainsbourg. Who could forget such memorable classics as Bonnie and Clyde or Comic Strip?