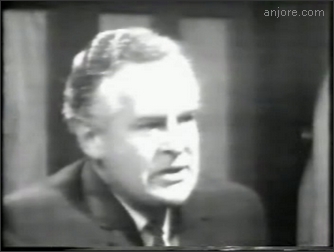 This weeks episode of Callan, Heir Apparent introduces a new regular leading character played by Derek Bond. 'Hunter' - or Head of the Section (played, by Michal Goodliffe) has been killed by an enemy agent and this week a new 'Hunter' is appointed, who has to be escorted out of Germany by Callan and Meres.

This role is pIayd by Derek Bond who became very well known to British cinema audiences just after the war. He has appeared frequently on telvision but this is the first time he will have taken a regular lead in an ITV straight series.

Derek was born in Glasgow in January 26 1920. He was educated at Habrdasher's Hampstead SchooL He begin his career as an ASM in 1937 at the Garrick Theatre, and then went to Colchester Repertory where he stayed until the outbreak of war in 1939., He then joined the Army and served with the Grenadier Guards. He was wounded in Tunisia awarded the MC, taken prisoner in Italy and remained in captivity until VE Day.

Three weeks after being liberated from a German prison camp, Derek returned to a similar camp to play the part of a prisoner in 'The Captive Heart' He was under contract to Ealing Studios and he made two films for them before transferring to the Rank Organisation For them he starred in many films, including 'The Weaker Sex', 'Christopher Columbus', 'Broken Journey!, 'Scott of the Antarctic and many others.

Subsequently a free-lance he made 'Hour of Thirteen' for MGM. In 1965 he starred with Cliff Richard in 'Wonderful Life' and in 1967 with Norman Wisdom in 'Press for Time'.

Throughout the years of his film contracts, Derek Bond did as many television plays as he was allowed, the most memorable being 'The Silver Cord', 'Frieda' and 'The Place of Execution'.

When the famous 'Tonight' programme appeared, Derek was one of the film reporters and supplied forty five reports in the first Year. One of these opened the first programme: During this time he wrote and directed many small documentary items for television and cinema use.

During the last ten years Derek has averaged about two drama appearances a year on television and has also written some televison plays. His 'Uschedu1ed Stop' attracted some keen attention during the last of the 'Armchair Theatre' a series. He has also written plays for the theatre. Derek has made so many appearances as a guest star in Repertory companies and on tour that he has lost count. His last appearance in the West End was in 'A Scent of Flowers' by James Saunders at the Duke of York's where both the play and he personally scored a great success with the critics.,

Derek has had two of his plays produced but has yet to achieve a West End success in this field. But he's working at it!

Derek's 'Hunter' is a very different Head of Section to his two predecessors Ronald Radd and Michael Goodliffe He describes his Hunter' as a man who has had a classical education and finds war intolerable - an amateur soldier who has drifted into intelligence, while actually hating the jobs He has a sympathy for 'Callan' though their social backgrounds are very different but he dislikes Meres because of his ruthless sadism. This 'Hunter' is the warmest and most compassionate of the three. Derek has drawn on his own personal experience of army life to create the character. He says 'If you are cast in a series the character you play should reflect your own personality and experience,'