Peter Cook from Not Only-But Also 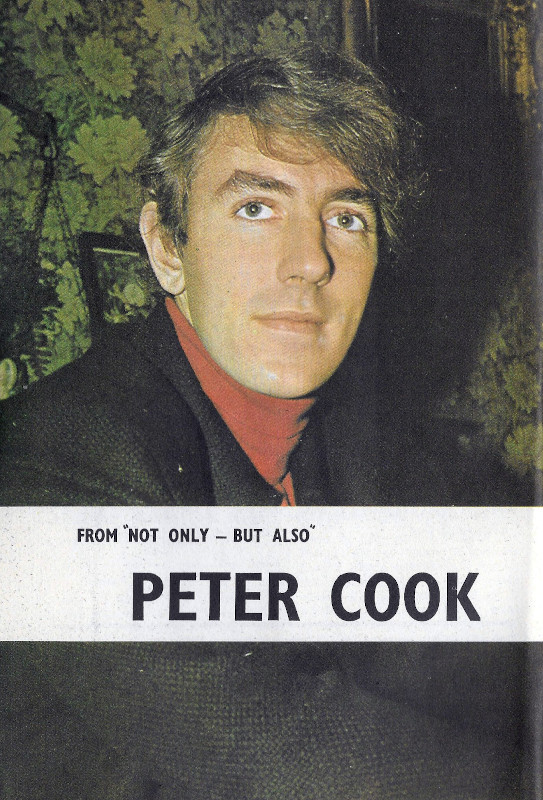 New Zealand TV Weeky's London correspondant "Ad Asira" interviewed both Peter Cook and Dudley Moore of the BBC's Not Only-But Also TV show. With due consideration for his sanity. "Ad Astra" conducted these interviews separately. This week we publish his encounter wifh Peter Cook; next week, his unconventional visit with Dudley Moore.

COMEDIAN Peter Cook spread out both hands, cocked an eye at me, and said very earnestly: You can say I have no very strong links with New Zealand-I'm no relation to Captain Cook.

In a special Christmas edition of Not Only-But Also recently screened in Britain, Peter appeared as "Hiram J. Pipesucker" an American guide to "swinging London" (which included a visit to the "In Lavatory," an exclusive gents' convenience which had Beatle John Lennon as its doorkeeperl. But I discovered that the real Peter Cook is rather bored by talk of this city's swinging scene and feels that he himself cuts a mildly ridiculous tigure amidst it.

Of course. it is true, I think that London today has many more beautiful birds (girls) in their miniskirts and so on, per square foot, than any other city in the world to- day, he reflected.

If partner Dudley Moore had been present, I am sure that he would have butted in (in Cockney voice) with some mock-serious remark like: That's all right, Pete, if you happen to have got a square foot . .

But there was no Dud-the interview was taking place in the lounge of Mr Cook's early Georgian style Hampstead house (which once belonged to H. G. Wells, thus adding a further margin to the price paid to own a dwelling in London's moat fashionable suburb). And here it is easy to discover the reason Peter Cook is not very impressed with the in-crowd, swinging-scene, life-after-dark aspects of London: unlike partner Dud who views matrimony with a rather jaundiced eye, Mr Cook, aged 28, has engaged in it, likes it, has an attractive wife Wendy and two young daughters (Lucy is 2}, Daisy one and a bit).

In his Man-About-Town voice, Peter says things like: It's the bourgeois values of married life that are dragging me down. Then in his natural voice, he adds: That's garbage.

I don't think I could operate at all unless I was well looked after-which I am.

The conversation broke off while Peter excused himself to answer the telephone and gave some cheek to Alan Bennett, another of the original Beyond the Fringe stage team (Jonathan Miller was the fourth).

It gave me the chance to gaze round the lounge, which could have easily been the set for one of his TV sketches-antique chamber pot, rocking chairs, Victorian toy (a rick-shaw drawn by wooden horses which leap as it is pulled along), old coach lamps, antique polished brass tele- phone, "Polyphon" phonograph with massive trumpet speaker, old blue glass bottles and clock under glass -cover . . .

Wendy likes to collect all these things, he said, when he returned.

Cook's father was a District Officer in Nigeria-a fact which has been used to explain the lordly mien sometimes adopted by Peter-a sort of forest bwana stiff-upper-lipped at the news the natives were growing restless. He attended an English college-and won a scholarship to Cambridge. While he was there he broke into West End theatre by writing the revue Pieces of Eightfor Kenneth Willi-ames, and later provided most of the material for its successor One Over the Eight.

But it was Beyond the Fringe, the satirical show which opened in London in 1961 which made Peter Cook's name and wit well known, and provided his tirst taste of tinancial success. He started Scene, a short-lived show business newspaper which quickly lost about £10,000 for him, and also launched The Establishment night-club whose debts soon became a big burden.

A more protitable venture has been his Establishment Theatre Company, based in an off-Broadway theatre in New York, where he successfully produced The Knack and The Ginger Man. A partner runs the theatre for him but he usually visits it every few months and perhaps three times in a year. Present productions are Sergeant Musgrave's Dance and The Mad Show (inspired by Mad magazine).

In Britain Cook is better known for his publishing venture Private Eye magazine, which he owns and contributes to. It is popular if not always tinancial. Damages awarded to Lord Russell of Liverpool after publication of one satirical item were only able to be tinanced by a variety show (to which a number of famous entertainers gave their services) and donations from supporters of the magazine. The magazine has a reputation (good or bad, according to taste)-for its satire, audacity and near-obscenity. I don't think that there is any subject which cannot be funny, and most things have a funny side, Cook once explained.

Cook and Dudley Moore came together for the tirst time on television -in January 1965, when they made the tirst series of Not Only-But Also. The script was entirely their own product-the method of writing it was also intensely personal. They spend several months getting ideas, talking about them and then ad-lib- bing into a tape-recorder time and time again.

Gradually we whittle it all down into a show, Peter told me with a chuckle.

The tinal tape was transcribed, printed on to huge rollers which slowly unfurled as a guide track when the show was tilmed.

It was pretty set but still varied a little on transmission from rehearsal, which explains some of Dud's giggles, added Pete.

During one sketch, a discussion about art, Cook nearly threw his partner with an unrehearsed line, Moore tried to stifle his laugh, choked on a sandwich and spat a large segment of bread and cheese into Cook's left eye-but the show went on!

"Dud" and "Pete", the two Cockneys passing the time of day over chipped mugs of tea, have been perhaps the most successful product of the Cook-Moore brand of comedy-making.

Pete makes the most outrageous statements with the sublime contidence of one who cannot be proved wrong; Dud is the twitchy little man hanging bug-eyed on every word and making heroic efforts to match his mate's flights of imagination . . . as when they try to convince each other how -irresistible they are to women, reminiscing about the glamour girls who would not leave them alone. (Tap, tap, tap on the window . . . Betty Grable.)

Peter Cook has another famous character not known to New Zealanders-"E. L. Wisty," the 'raincoated, soft-hatted pessimist and philosopher who relates tales of his over friend "Spotty Muldoon" and is the living, unsmiling proof that a little knowledge is a dangerous thing. He appeared regularly in the show On the Braden Beat on Independent TV in Britain, but the programme, compered by Bernard Braden includes a good deal of topical comment so is not very "exportable." Cook's "E. L. Wisty" -has also appeared regularly in a TV commercial extolling the virtues of a brand of beer-deadpan.

There was the special Christmas issue of Not Only-But Also made by the BBC last year, but at the moment there is no detinite date for a third series in sight. Both Cook and Moore have many other commeitments and it will be a matter of tinding a convenient free time for both. But they will be working together in tilms if not for TV. At present they are writing the script for ta tilm based on the Faust legend-Dud sells his soul and Peter Cook plays the part of the devil.

Iast year they made the tirst of three tilms for Columbia--The Wrong Box a black comedy based on a Robert Louis Stevenson novel. The east included Ralph Richardson, John Mills, and Michael Caine, with Peter Sellers and Tony Hancock making guest apperances-bit names to brandish at the box office, but with Cook and Moore undoubtedly the biggest draw for its British audiences.

It is all a long way from the Foreign Office career his parents had planned for him when he first came down from Cambridge. The first thing Peter did was to lose his public- school accent-now he has the occasional Cockney vowel--but he says he could get it back quickly if he needed a Foreign Office job.

It's still the tugging forelock old Britain, Cook once proclaimed. Nothing wrong with that!-As for the swinging Britain? . . . Vidal Sassoon haircuts, Jean Shrimpton are trotted out as 'vibrant lively ideas,' 'the new classless Britain.' I think it's the most sickening phenomenon when you have a 'warm, dynamic Britain' based on Cockney hairdressers. Who cares about bleeding hairdressers and models'?

But he doesn't object to people coming up to him on the street and saying: Put on your funny voice, Pete.

Some aspects of his success he does not understand--The Times described Not Only-But Also as clean as a whistle.-It seemed filthy to me, Peter contided. 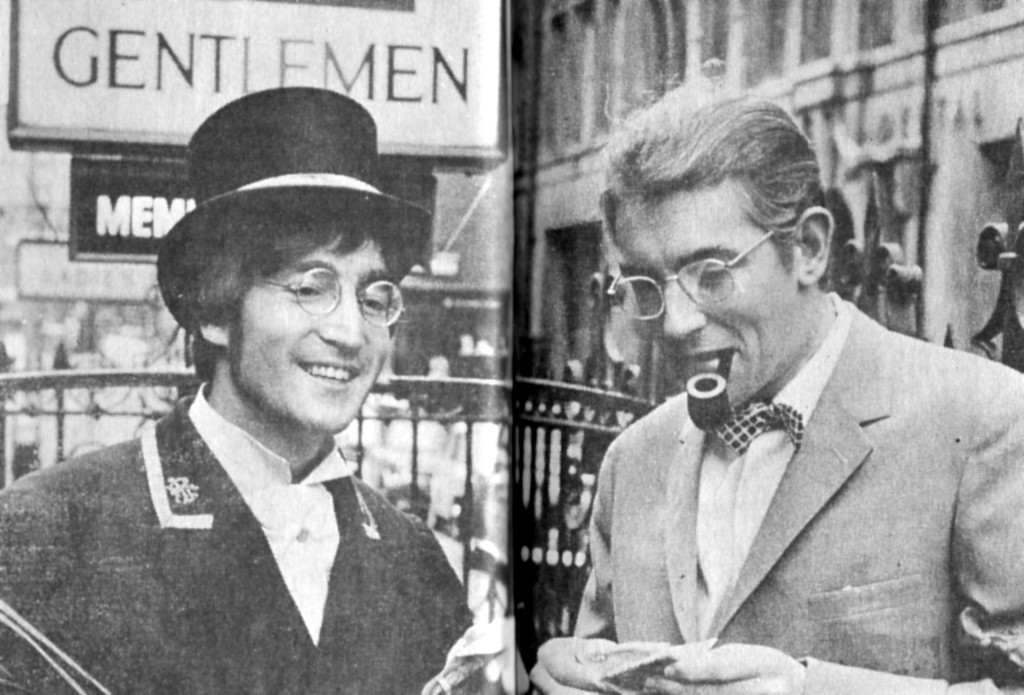 Twins? No. Beatle John Lennon (left) was Peter Cook's guest in a special edition of Not Only-But Also, daring which the bespectacled Lennon played the commissionaire at a select members-only 'Gents' in Soho while Peter Cook (right) took the part of an American TV reporter investigating "Swinging London".