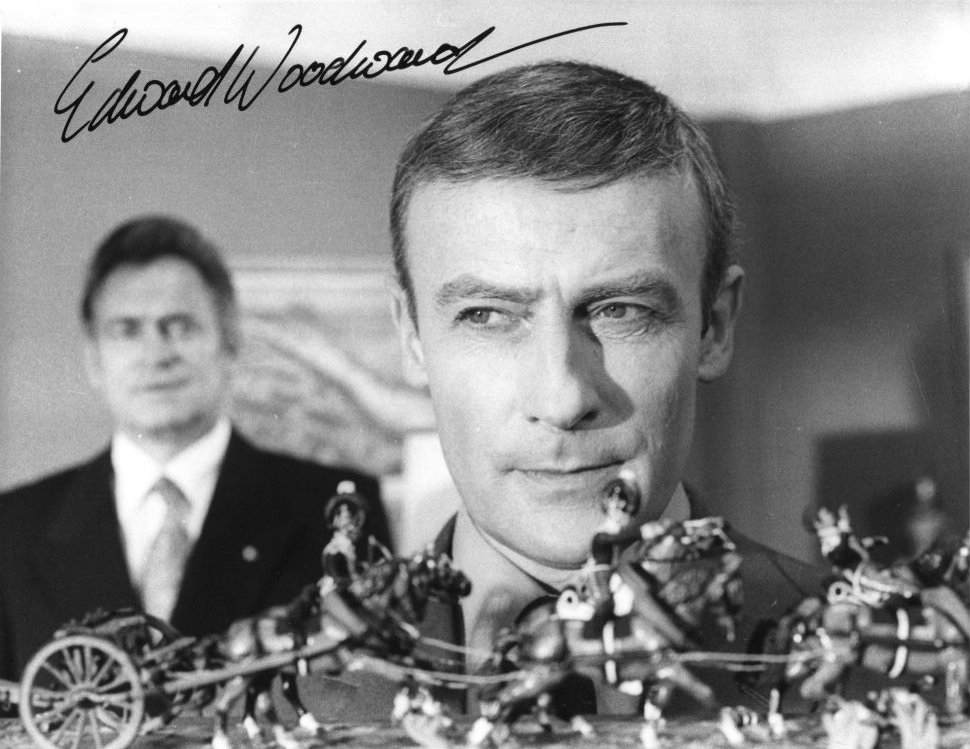 Daza was saddened to hear of the death of one of our favourite actors. No one could do steely anger as well as Mr Woodward and he was still doing fine work until his death

The Man Behind Callan

By M.Shirley Long in London 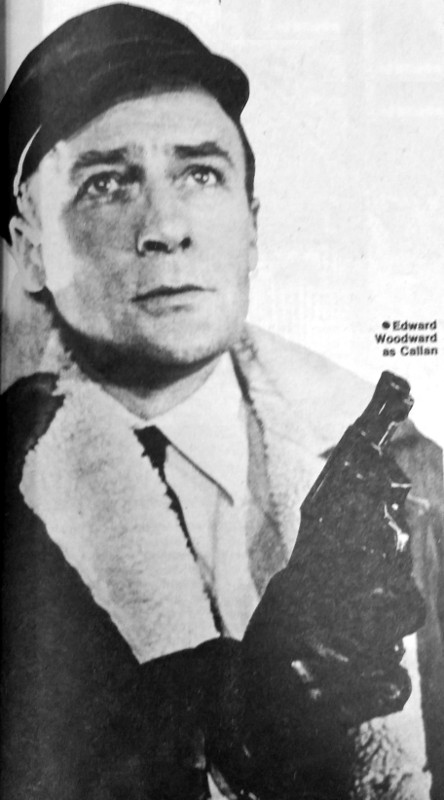 From the NZ Listener

It was a strange but facinating scene. Tucked into a electrician's room backstage at London's Palace Theatre was Sidney Carton in the elegant clothes of the French Revolution period intently watching Callan on TV

Carlton watched Callan with quiet absorption. It was difficult to believe that they were played by the same man - Edward Woodward No two characters could have less in common than the tough hardbitten cockney-voiced secret agent and the romantic, tragic hero of Two Cities, the musical version of A Tale of Two Cities. Many television actors are recognised by people in the street. But thus seldom happens to Teddy Woodward. This pleases him as he has no wish to be constantly in the spotlight. Acting is more important to him than fame or glory.

we talked about Callan, which made him a national figue after 20 years of acting.

I like to watch him, Teddy said. Early on, learned the actor's pitfall in watching his own films and television shows. You find you only watch yourself and not the film or play. You just have to detach yourself, empty your mind and watch the character as though you have never met him.

I get a lot of very interesting letters from people about Callan. Not just gushing fan-mail but letters from people who see him as a real character. I've had several from women who ask me if Callan has had in his earlier life an unhappy love affair. It doesn't say so in the stories, they write, but we feel there is a tragedy somewhere in the background. That is the powerful impression you give us. Now this really is extraordinary. It is true that there is no hint of a tragic love affair in any of the scripts but in the dossier - the background notes on the character that I was given to study -- there was a love affair that went wrong.

A man wrote to me and said he thought Callan must have had a tough encounter with military discipline in his service career, for clearly he has no time for posh-accented, stiff-upper-lip, brass hats and obviously hates Authority. Again this has never appeared in any of the TV stories but is in the character study notes. Callan was court-martialled.

After his television success and a film with Yul Bryniier called The File of the Goldern Goose, Teddy Woodward was delighted to be facing live audiences again in Two Cities There was that final scene on the steps of the guillotine when I sang that moving, beautiful little song It's a Far, Far better Thing. Every night I was aware of the hush that fell on the house. Then I could hear the first gentle coughs or sniffles and knew that people were shedding a quiet tear for Sydney Carton. I'm sure the ghost of Dickens was there, approving.

Teddy won a scholarship to the Royal Academy of Dramatic Art in I946. At 16 he was the youngest student and numbered among his fellows John Neville and Laurence Harvey. He trod the professional path of Shakespeare and the classics, in repertory and West End plays. It was on a tour of India in a Shakespeare season that he met a young actress, Venetia Barrett, who is related to the famous Wimpole Street family. When she wasn't on stage she was nursing Teddy who went down with para-typhoid on the tour. At Venetia's request they waited until they got home before they married. She didn't trust the nurse-and-patient relationship and the Taj-Mahal-by-moonlight aura.

Today she looks after their house and garden at Twickenham. The Woodwards have three children: Timothy, 16, Peter, 13, and Sarah, f. Moored on the Thames not far from the house is a 24ft motor cruiser.

When we were filming Callan at Teddington Lock I went to work in it if the weather was at all good, Teddy says. Mind you, I can drive there in 20 minutes but I prefer to take an hour and go by river. I must say it's a great performance at times, getting moored alongside, the studio crew giving me an admiral's reception.

His house is comfortable and obviously the home of a man of the theatre. Playbills are nicely spaced on the walls and a narrow study has shelves full of plays and the works of Churchill and Elizabeth Barrett Bfqwntng. Covering one wall in the dining-room is part of Teddy's collection of swords and daggers, real and ornamental, historical and decorative. I carry a gun in Callan though I abhor guns. But I love these things.

Also prominent in the room is at beautiful chess board and set. I play with my eldest son, Timothy. who invariably beats me, he explained wryly.

There is little danger that he will become typecast in the Callan mould. Teddy's range is far too wide for that.

I think Noel Coward would subscribed to that. After all, he saw Teddy playing a gormless, up-for- the-cup north country man in Rattle of a Simple Man and immediately offered him the lead singing role in High Spirits, the musical version of Coward's Blithe Spirit

Noel didn't even know I could sing a note, Teddy told me. I had a petrifying audition with him in New York where I couldn't think of a single song to sing. In the end I managed Oh What a Beautiful Moming from Oklahoma with his pianist accompanying me as best he could, since I'm sure I was about an octave flat. Noel beamed at me and said, Thank God, dear boy, you can sing as well as you can act.