There were muffled calls as I rang the door bell of his Chelsea fiat. A minute or two later the door opened and he stood there looking apologetic. his face bearing the remnants of shaving-cream, his torso bare from the waist up.

His eyes looked up at me through a shorn-Beatle fringe. Dudley Moore is not very tall. He is an alleged 5ft 2 1/2in but some say that this errs on the side of generosity.

But in spite of his size, or maybe because of it, thousands of British women are mad about Mr Moore. popularly known here as "Cuddly Dudley."

Left to cogitate in Dudley's lounge. I marvelled first at the mess-I had been warned, Dudley was not generally granting interviews at present because he was totally engrossed in composing the music for the film 30 is a Dangerous Age, Cynthia in which he stars, and which is due to he released in April.

Strewn around the room, on sofas, chairs, tables were film scripts. stop-watches. tape recorder and tapes, music manuscripts. books, notes, pencils. dirty cups. etc, etc. In one corner of the room: a hair dryer. Poking out from One of the chairs. a pair of women's silver high-heeled shoes.

As I waited for him to finish shaving, I glanced at Dud's bookshelves. Among titles: Memoirs of an Amnesiac. Release from Nervous Tension. Bizarre. Aphrodisiacs in your Garden . . . poor Dudley probably didn't even have a window box in this flat in a fashionable mews area of Chelsea) but he is moving shortly to a house in Hampstead to be nearer friend Peter Cook. Conscious of his height, Moore dscribes himself as extremely small and ludicrously passionate. But size doesn't seem to cramp his style. Most of my birds seem to be around 5ft 8in and usually I seem to he involved with three at a time. Each of them knows about one of the others. but never the full comple- ment.

It is difficult to distinguish between reality and fantasy in much of Dudley's life, He oscillates mostly between his two careers-jazz pianist and clown-comedian-both of them containing elements of fantasy. 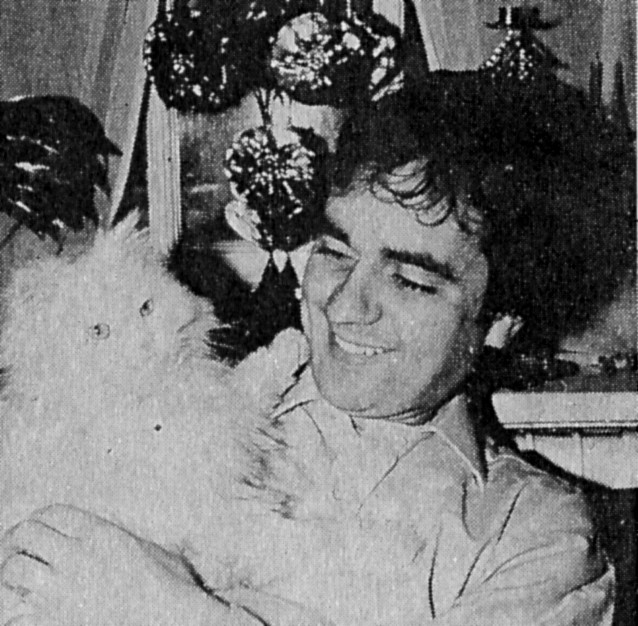 He seems most concerned with amalgamating all his interests satisfactorily, and at present feels the solution may lie in film work in which he can act, compose the music, and write material himself.

I shall concentrate on film work for the next few years if possible, Dudley told me. I can get totally involved in films.

There might be another TV series of Not Only-But Also; though he couldn't see it being fitted in the foreseeable future. But at any rate the Dud-and-Pete combination would not die. Dudley explained that he and Peter Cook had legally bound themselves to make three pictures together in the next four years.

His latest film 30 is a Dangerous Age, Cynthia which cosstars his real-life girl-friend, Suzy Kendall, portrays a world of realistic desires translated into fanciful visions of achievement. The plot basically centres round the little man who is six weeks away from his thirtieth birthday. He runs away from home and sends his laundry back to his mother every week, who returns it to him neatly laundered with sherbet and bread pudding packed between the shirts

Suddenly the little man decides to write a great musical work and get married all before he becomes 30. From then on the little man lives in a world of illusions and fantasy figures impersonated by Dudley-with no hard edges between the reality and illusions. The man imagines he is Beethoven driving a car and-here he is driving it. Dudley has explained that most of the imaginary outlets for the little man's frustrated drea-ms are based on his own personal feelings when -he was approaching the age of 30.

Dudley passed the age of 30 in 1965, but he is perhaps more obsessed with the divide made in his life at 14. He was born in Dagenham, east of London, where for 50 years his father was an electrician on the railways. He was named Dudley after a bishop (one of his uncles was a missionary) and he was a solo treble in a church choir until his voice gave out in the middle of an anthem. He was a bright, hard-working little boy, but at 14 he suddenly realised that he was loathed by the other boys, bullying or disapproving, for liking work, so he joined the stream and neglected work. The only reason he turned to studying music was because, unlike maths., it was easy and I could do it easily and still have time to play with the boys and get their approval.

When he was 18 Dudley won an organ scholarship to Magdalen College, Oxford, where he composed a score for a performance of Aristophanes' The Birds and decided on a musical career. (Other compositions included a toothpaste advertising jingle, music for a chorus of weighing machines in One Way Pendulum, music for ballets, six songs for a musical version of Max Beerbohm's The Happy Hypocrite.)

At Oxford a new fear drove Dudley, from working class origins. It was the fear of talking with the wrong accent. Initially he could hardly open his mouth but he soon acquired a superficial polish and a catherine-wheel laugh. (Nowadays he feels completely classless in Britain's still stratified society.) Dudley was called upon to use his musical talent to put on a smart revue in the university. It was from this beginning that his part in the Beyond the Fringe revue team, the Oxford and Cambridge students who launched the new satire show on London so successfully in 1961, was assured.

Later Dudley became best known for his jazz trio playing nightly in The Cool Elephant night club in London-unti1 the day in 1964 that he teamed up with the gangling Peter Cook of his Beyond the Fringe days and not only Not Only-But Also was born but also the new Dudley Moore, the glossy scintillating or drily twitching comedian, Dud.

Nowadays the Cook-Moore pair are seen in two different ways. As a team they are undoubtedly the country's top comic duo, the disconnected conversation of Dud and Pete has become a national habit, mimicked by schoolboys on the trains every morning.

Peter Cook on his own is seen as the far-out one, the patron of the arts -and publisher of blue Private Eye magazine, so far out that he can happily admit to being a "square".

Dudley Moore seen in his own light is still . . . the cuddly one!-jazz pianist extraordinary, with the with-it friends of the "in" places, the dizzy smiles and funny voices, the tiny Dud wearing the latest in men's fashions.

There is something very reassuring about Dudley-I think it is the way his humble upbringing keeps breaking through his elevated present with twinges of nervousness and self-doubts.

Any distractions are fatal when I am composing, Dudley toldime sorrowfully.

Then he turned round and I noticed that his impeccably ironed blue shirt had a ragged hole in the back of it. The hole had to be put in it for the film, he said. I don't know how it -happens but now I keep putting this damn shirt on before I realise that it is the one with the hole in it. -He needs to be mothered, girls! 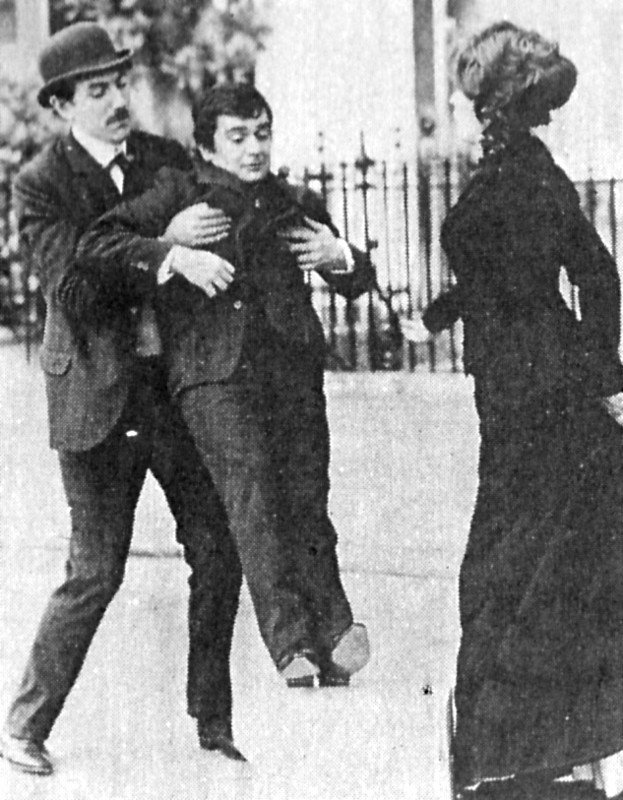 Cook, Moore and Nanette Newman in an excerpt from their movie, The Wrong Box.