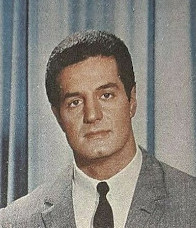 PETER LUPUS, the strong-man of the Mission: Impossible team, has always shown signs of a large-stature. He weighed 10lb when he was born, and while still at high school he grew to over 6ft in height and weighed more than 12 stone. As a boy he would put away five meals in the course of a normal day", and when he joined the Army in 1958, he had to wait six months to begin basic training as the Army had to make uniforms to fit him.

Peter decided to become an actor during his three-year stay at Butler University, when he found he could combine his strength with his acting ability during the production of Sophocles' Antigone. During the performance he carried one of his fellow students--all 12 stone of him.

Early in his career, Peter was known as Rock Stevens, and it was then that he made such films as Muscle Beach Party, and Goliath at the Conquest of Damascus.

To keep in trim, Peter works out at a health spa for at least three hours a week and takes 150 organic vitamin and mineral pills a day. At one stage he was taking as many as 250 of these pills a day since he cut his weight down-from a mere 17st 12lb)!