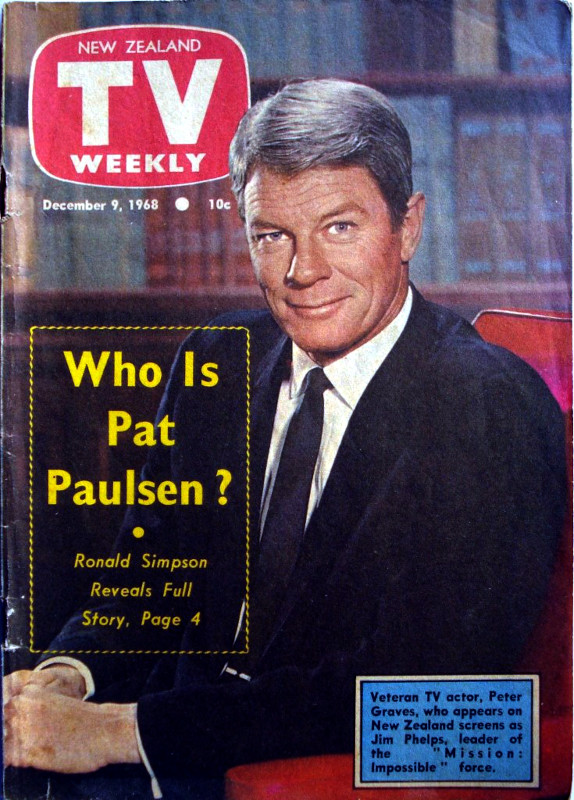 PETER GRAVES who is Jim Phelps, the big blond chief of the Impossible Mission Force, is back to lead the crew into new, daring adventures in a further series of Mission: Impossible starting tonight (7.30).

Graves (real name Aurness) was born in Minneapolis, Minnesota, of English. German and Norwegian ancestry. Tall, agile and powerfully-built, he was an outstanding schoolboy athlete and Minnesota state hurdles champion during his last two years at high school. As well as sports. he developed an early talent for music, joined the Musi-cians Union at 15 and became so proficient on the clarinet and saxophone that he was able to sit in with big-name bands visiting Minneapolis and St Paul while still at high school.

He joined his local radio station WMIN as a staff announcer at the age of 16. His brother Jim, later to shorten the family name to Arness and go on to inter-national fame as Matt Dillon on the Gunsmoke series, also got into radio and became an announcer on a rival local station.

Following high school and his air force training, Peter Graves enrolled at the University of Minnesota where he appeared in campus dramatic productions, also playing with local bands, and doing part-time radio work.

Graves went to Hollywood to start his professional career. On the basis of a small part in a television show he was given a part in the western, Rogue River, then co-starred with Dane Clark in Fort Defiance, later landing the choice part as the German spy in Billy Wilder's Stalag 17, followed by major roles in The Raid, Black Tuesday and The Court Martial of Billy Mitchell.

His first continuing TV role was as the ranch owner in the Fury series which ran for six years and was re-titled Black Stallion in re-runs. Next came the starring role as an Australian immigrant in the Whiplash series. which took Graves to Australia for a year.

After more television work in Hollywood he went to England to film the series Court Martial. As soon as that was completed, he was rushed back to co-star with Dean Martin in Texas Across the River and with Doris Day in the comedy The Ballad of Josie. It was then he got the part as the head of the IMF at the beginning of the second season of Mission: Impossible.

While Peter Graves's outside activities are some-what curtailed by his Continuing role on Mission, he has been able to make a number of guest appearances on top variety shows such as the Dean Martin and Carol Burnett programmes, singing and resurrecting his old professional skill with the clarinet and saxophone. He stayed in excellent physical shape by swimming. surfing and riding and was considered to be one of the finest horsemen in Hollywood.