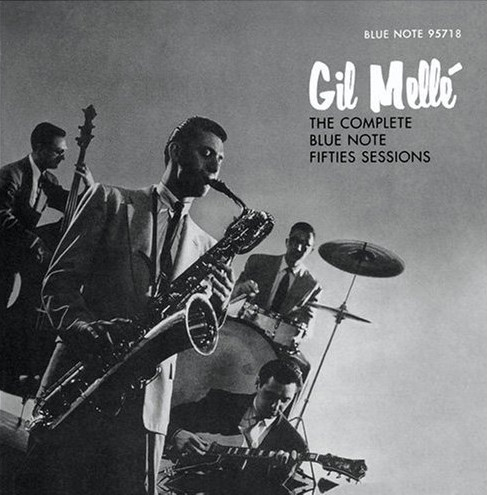 The following comes from his no longer functioning website.

Born in 1931 in Jersey City, New Jersey, Gil Mellé displayed an early, precocious talent for art in all its forms. A winner of several national painting competitions while still in his teens, Mellé was also playing the jazz clubs of Greenwich Village before he was old enough to drive.

An aggressive innovator, Gil Mellé was constantly searching for new means of expression---in painting he was one of the first artists to incorporate collaged pieces of glass, metal, plastic and computer cards into his pictures, and he produced several record covers for Blue note records; in music, he is credited with introducing electronic instruments into jazz. When synthesizers were not available commercially, Mellé built them from scratch, and played the tenth Monterey Jazz Festival with the world's first all-electronic jazz group, "Gil Mellé and the Electronauts."

Relocating to Los Angeles over thirty years ago, Mellé continued his dual careers as professional painter and musician. His fame was the result of successful accomplishments in the field of motion pictures; Mellé wrote scores for over 125 movies. A member of the small pantheon of professional composers whose services were always in demand, Mellé was able to pick and choose his projects. For much of his last ten years, he declined most offers to devote his full attention to the visual arts.

On a computer that he built himself, Gil Mellé applied his intuitive command of harmony, balance and structure to the creation of digital paintings, or "e-paintings". This is an entirely new form of art, absolutely true to the times in which we live. Not computer-generated, this art was artist-generated, using the computer as a tool. Mellé's vast experience lent a rare integrity to these mostly traditional images, and his life-long experience as a serious and professional painter maked him uniquely prepared to fully utilize this revolutionary medium.

A passionate microscopist and open-cockpit pilot, Gil Mellé absorbed visions of the natural world that greatly increased his inner library of forms and colors. Mellé's expertise extended even to physical structures, having designed and built additions to his Malibu home, as well as working fountains, monumental sculptures, cast-iron gates and intricate leaded-glass windows.

These pictures, which Gil Mellé described as "Cybercloissonism, (referring both to the computer he used as a tool and to the effect of the light transmitted through his colors) were typically output one at a time as digital tranparencies (it could take weeks for a single perfect output and no two are alike) and were then mounted in light box enclosures of exotic hardwoods and stainless steel. The enclosures were designed and constructed by the artist, by hand, utilizing the finest materials available. Like the antique motor-cars that he collected, these artworks were built to last, with color integrity guaranteed for 200 years, and illumination systems that will shine for thousands of hours without ever changing a bulb.

NOTE: Another album was recorded for Prestige Records but unreleased until recently on the CD reissue of "Gill's Guests" by Fantacy Records. A correction should be noted here regarding Fantacy's liner notes. Phil Woods is listed as being on alto saxophone but in reality it was Zoot Sims on Tenor Sax. This record also features Teddy Charles and Art Farmer.