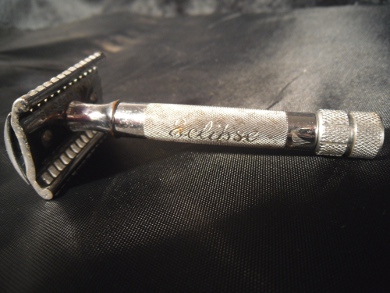 The Eclipse Red Ring razor is a stylish piece of art deco kit. Manufactured by James Neil & Co of Composite Steel Works, Napier Street, Sheffield, England, the Red Ring had several innovations and was protected by patents. British patent no 344280 by W. V. Hudson and J. L. Pickerell is from 5 March 1931 and British patent no 380958 was granted in September 1932 to J. Neill & Company Limited. Innovations include the head design, the adjustment mechanism and the magnet. It is quite a heavy razor at 62.1 grams (2.19 ounces). On the bottom plate there are teeth but these have a solid guard bar before and below them, the top plate has matching grooves.

The adjustment mechanism works by turning a knob on the bottom (which has an arrow on it) up fully for mildness then slacken it off slightly for more aggression, there are markers on the handle so you can calibrate your setting. It clicks as you wind it back. There is a handy magnet in the bottom of the shaft - helpful for picking a blade up from a flat surface. According to Ian Fleming secret agents made use of the hollow shaft, but that might just be a rumour. There is a stylised solar eclipse design on the head: a square moon is moving in front of a square sun which has rays shooting off it.