of the 1960s and she achieved her phenomenal success mainly through sales of prints of her work which, at the height of her fame, literally sold in their millions, rivalling sales of other popular print artists of the period such as Tretchikoff. Mostly she signed her work Dallas-Simpson, but she also painted under a number of pseudonyms including Emma Louise, Audrey, and Kelita with a subtle change of style in the painting but with the same subject matter.

Dallas-Simpson was originally from London, and moved with her husband in the mid 1960's to live by the sea in a mobile home in Lancing, West Sussex. The two worked as a team, with her husband helping to prime her canvases. She was also known to paint directly on board. 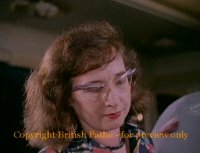 Her images of big eyed urchin children remain fresh and instantly recognisable. At the height of her popularity in the late 60's many millions of reproductions of her work were sold and her principal publishers were Felix Rosenstiel's Widow & Son, Frost & Reed (now part of Rosenstiel's) and A.W. Vivian Mansell (no longer in business). They are again extremely popular with the rising interest in retro and kitsch chic. Dallas-Simpson's original paintings, from which the prints were made, are now both rare and highly collectable.

This picture of Audrey Dallas-Simpson is a still from a British Pathť film 'Hair Painters' featuring Audrey Dallas-Simpson. Enid loves her glasses. Click on the image to see the film on the their youtube channel site. Don't forget to come back to 'It's So Last Century' though! 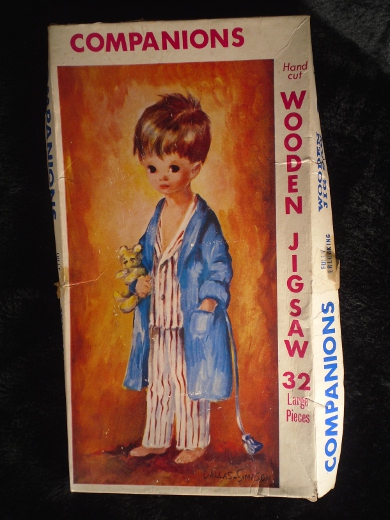 Daza was captivated by a Companions Wooden Jigsaw featuring a print by Audrey Dallas-Sampson, and he knows that you will be too. This is a twist on her prints of doleful, big-eyed boys and girls. A complete hand cut wooden 32 piece jigsaw in the original box.