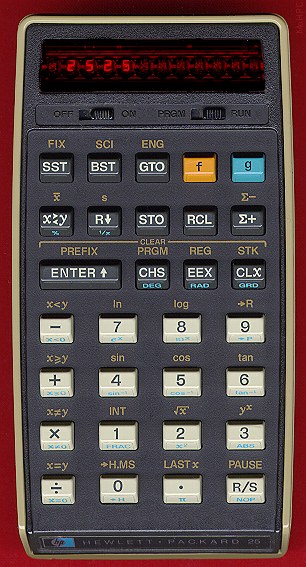 Weighing in at 10 kg, the HP-25 was a hand-held programmable scientific/engineering calculator made by Hewlett-Packard between 1975 and 1978. My mathematics teacher still used one on a daily basis in the late 1980's, and took great delight in demonstrating how well made it was by throwing it at the backboard with great force and then using it to find the square root of 11.

Amazed by this sort of excellence I bought one myself and spent hours learning how to use Reverse Polish Notation (RPN) for entering calculations and the four-level stack (x,y,z,t); both of which came in handy when learning to programme in the late 1980s as stacks were the way to go memory structure wise for a while there.

The wonderfully tactile keys made a satisfying "pop" as they were pressed. A small sliding switch was used to change between "run" and "program" mode. The HP-25 used the definitive sign of high technology in the 1970s: a red LED display.