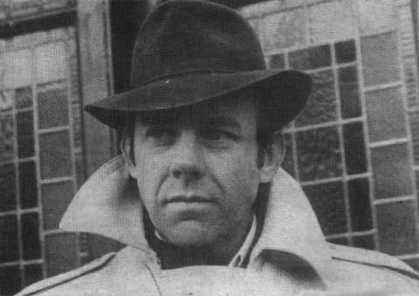 Six months before viewers were treated to the dodgy dealings of Arthur Daley and his mucle-bound sidekick, Terry, in Minder, ITV launched this not too dissimilar light drama. The focus was on Turtle - a character first seen in the 1975 thriller serial, The Hanged Man - a lovable, unrepentant, small-time crook who lived with his Aunt Ethel and was joined in petty larceny by the big-eating Razor Eddie ( a giant former hooligan, now bettering himself ). Indicative of this duo's criminal ambitions was the fact that they nicked a van for the modest fee of £35. What they didn't realize was that the van contained a hoard of stolen safety-deposit boxes, which their rightful and wrongful owners soon demanded back. Keeping out of the reach of both police and fellow law-breakers, Turtle and Eddie discovered that the boxes contained a fortune. They hid half in a safe in a scrapyard and the other half in a neighbour's loft, and set up a company, 'Guaranteed Security Inc.' (which specialised in murky underworld operations), with some of the lolly, taking a five-year lease on a high-rise office in Victoria. Unfortunately, each security box (one opened per episode) also contained a headache for the lads - top-secret documents, important chemical formulae - that they needed to shake off. The setting was Fulham, and Turtle's local was The Robin Hood, where the redoubtable Aunt Ethel worked as a barmaid, calling time while her husband was inside doing it. The part of Turtle's nemesis, Supt. Rafferty, was taken over by David Swift after original incumbent James Grout broke a leg. Alan Price wrote and sang the theme song.

Quoted from the Penguin TV Companion by Jeff Evans, published by Penguin, ISBN 0-140-51467

The show had a very deadpan sense of humour, with Razor Eddie having some very funny lines. Eddie was Turtle's minder, but he was a heavy with a brain, never getting violent when silent menace could get the job done. One sequence that stands out in my mind involved Eddie and another minder stepping outside for a bit of a fight. They soon return, Eddie helping his wounded opponent back in and offering the following words of advice:

Never try a left handed drop kick in a confined space, it leaves your head too close to the wall.

The humour extended to some very strange characters as you can see from the names in the episode guide. Turtle's young nephew Jason was often kept chained to the kitchen table, and he had the ability to fix any piece of mechanical or electronic equipment that came his way when bribed with gin. He would often be sent outside to do damage with a box of criket balls, whips, toy guns etc but was always looked after by the family - Don't worry, if it rains I'll throw a tarpolin over him

The TV Times in the UK carried a feature to coincide with the first episode of Turtle's Progress called Episode Minus-One ; this was something they often did for new series as an introduction to the characters in fictional form. It concerns events just before the start of the series. I hope to track a copy down in the future.

Michael Attwell (Razor Eddie) displays his skill with a pen with this cartoon of Turtle and 'Eddie'. 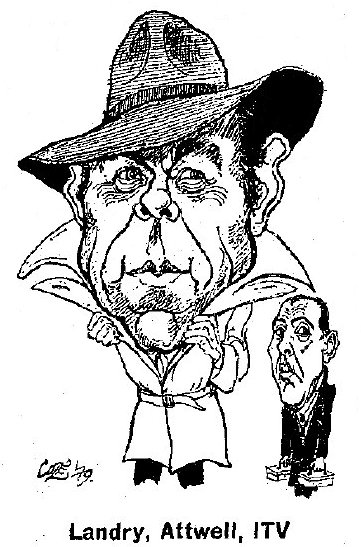